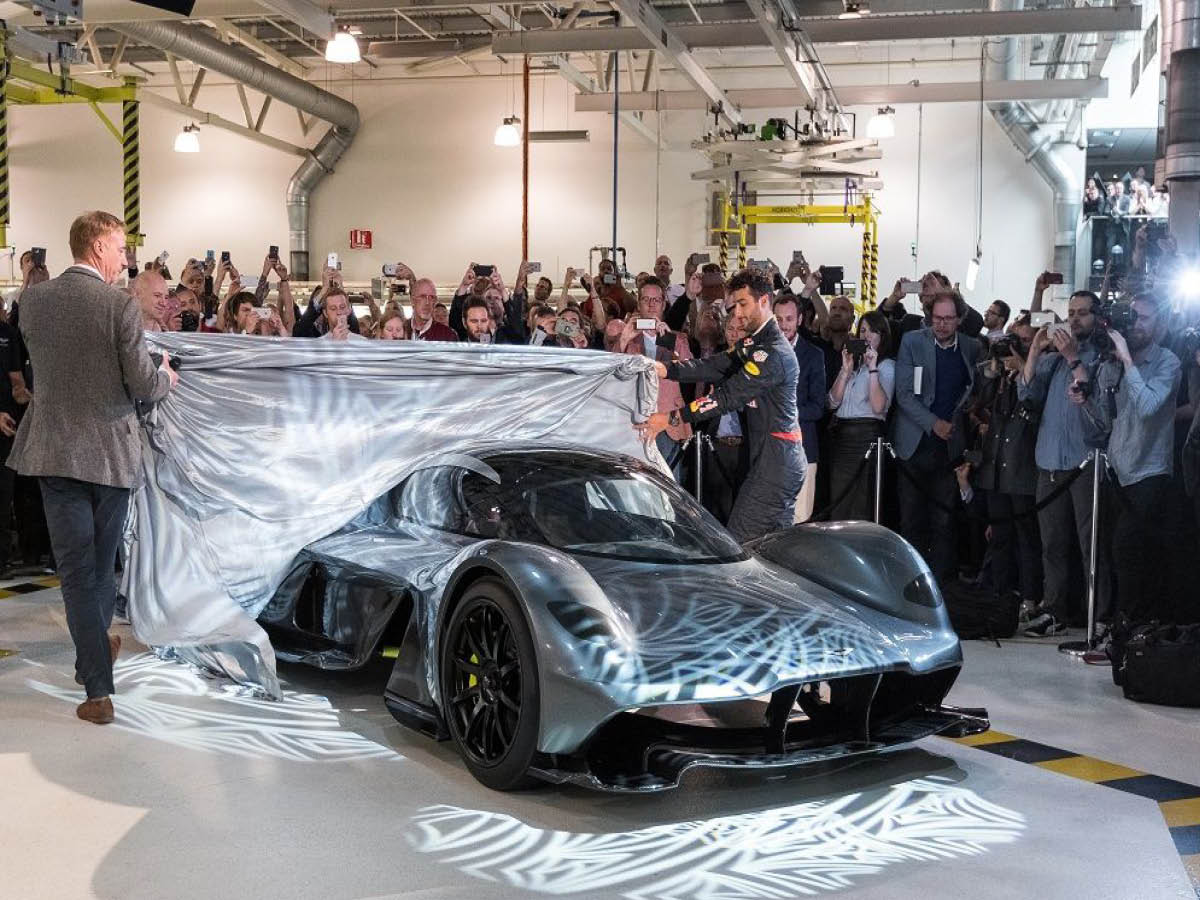 The product of a unique Innovation Partnership between the British luxury brand and eminent F1TM team, this ambitious, uncompromising and wholly extraordinary collaboration combines the vision and skills of two world-leading brands to create a road car the like of which has never been seen before.

The three men charged with realising this shared vision are Adrian Newey, Red Bull Racing’s Chief Technical Officer and the world’s most successful F1TM designer, Marek Reichman, Aston Martin EVP and Chief Creative Officer and David King, VP and Chief Special Operations Officer. Together they spearhead a formidable alliance. One that combines more than a hundred years of specialism – both with heritage, making some of the world’s most beautiful and charismatic GT cars, and with technological brilliance and relentless pursuit of speed and efficiency that has seen Red Bull Racing excel in the ferociously competitive world of Formula One.

Reichman and Newey are working closely on all aspects of the project, striving to ensure the AM-RB 001 is an unprecedented fusion of form and function: a car engineered to be entirely useable and enjoyable as a road car, but with the capability to perform like no road car before it on a race track. For those who crave an even more intensely focused driving experience, a track-only AM-RB 001 is also in development, the projected performance of which is in line with that of today’s LMP1 Le Mans sports prototypes.

Built around a lightweight carbon fibre structure, the AM-RB 001 boasts truly radical aerodynamics for unprecedented levels of downforce in a road-legal car. Thanks to the genius of Newey’s design much of this downforce is generated through underfloor aerodynamics, leaving Reichman free to craft a pure yet breathtaking dramatic form that elegantly expresses both the AM-RB 001’s cutting-edge dynamism and the unmistakable essence of Aston Martin.

Uncompromising in all respects, the AM-RB 001 is a bespoke machine from the tyres up. It will be built by David King and his team at Gaydon, in the purpose-built facility created for Aston Martin’s original hypercar, the One-77. More details of the AM-RB 001’s technical specification will be revealed in due course, but its heart is a new, mid-mounted, high-revving, naturally aspirated V12 engine with the potency to achieve a 1:1 power-to-weight ratio; 1 bhp per kilo of weight.

To cope with the extreme aerodynamic loadings at high speeds yet deliver the on-road usability and comfort levels that sit at the heart of the concept, the AM-RB 001’s suspension system will feature innovative technology and employ principles honed by Newey over his thirty-year career. Likewise, the transmission is a clean-sheet design conceived by Newey and developed by Red Bull Advanced Technologies.

While boundary-pushing performance is clearly of paramount importance, so too is exceptional efficiency and packaging. Newey’s unrivalled knowledge has enabled the AM-RB 001 to be extremely light and compact, yet offer genuine comfort and space for driver and passenger and house a V12 engine.

Adrian Newey, Red Bull Racing’s Chief Technical Officer, says of the AM-RB 001 project: “I’ve long harboured the desire to design a road car. The formation of Red Bull Advanced Technologies brought me a step closer to realising that ambition, but I believed we should work with an automotive manufacturer. Aston Martin was at the top of my list. The synergy between Red Bull Racing and Aston Martin is clear. I knew Red Bull Racing had the ability to handle the pure performance aspects, but Aston Martin’s experience of making beautiful, fast and comfortable GT cars is of great benefit to the project. I’ve always been adamant that the AM-RB 001 should be a true road car that’s also capable of extreme performance on track, and this means it really has to be a car of two characters. That’s the secret we’re trying to put into this car – the technology that allows it to be docile and comfortable, but with immense outright capabilities.”

David King, Aston Martin’s VP and Chief Special Operations Officer, adds: “Working at Aston Martin means you get to be a part of some truly special projects, but the AM-RB 001 is a dream – a true once-in-a-lifetime opportunity. Of course it’s a huge engineering challenge, too, but the game-changing objectives of this programme have a uniquely energising effect on everyone involved. We have world-class people and facilities at Gaydon. We’re all motivated to achieve great things and take Aston Martin to the absolute pinnacle of road car performance.”

Marek Reichman, Aston Martin’s Chief Creative Officer, says of the AM-RB 001: “Working so closely alongside Adrian and an organisation like Red Bull Racing is a fabulous experience. By definition the objectives we’ve set for the car ensures there has never been an Aston Martin – or any car, actually – quite like the AM-RB 001. The shared challenge has been finding that magical tipping point where we achieve the most efficient engineering solutions and the most beautiful styling solutions without any compromises. My personal challenge has been expressing the AM-RB 001’s extraordinary performance and the unique way in which it delivers that performance. Its style reflects its revolutionary nature, while possessing the form and beauty that makes it unmistakably an Aston Martin.”

Continuing the on-going Innovation Partnership, the task of engineering the AM-RB 001 will be shared between Q by Aston Martin Advanced and Red Bull Advanced Technologies, with production taking place at Aston Martin’s Gaydon facility. Total volume will be between 99 and 150 road cars inclusive of all remaining prototypes and 25 track-only versions, with first deliveries commencing in 2018.