Born Free: A message about conservation before it became a ‘thing’

Born Free, the story of a lioness in Kenya and the couple who hand-reared her, inspired an entire generation of conservationists. Richard Webb travels back to Elsa’s Kopje to witness the impact of the lioness’s story.

If Joy and George Adamson are not familiar names, then Born Free and Elsa may strike a chord. The original story – captured in the book Born Free – tells the moving account of how the Adamsons reared a wild lion cub to maturity, preparing her to live freely in the wilds of Kenya. This story became the catalyst for the documentary-style film, Born Free.

There is a poignant moment in the film, when Elsa the lioness walks across the savannah towards the couple.  She had spent a week in the wild trying to fend for herself but as she approaches them, they see that she is thin and injured.

Joy and George were attempting to return the lioness they loved to the wild, but her injuries proved to George that she was unable to survive in her natural habitat. ‘What’s wrong with a zoo anyway?’ George asks Joy. ‘Is freedom so important?’ ‘Yes!’ cries Joy with passion. ‘She was born free and she has the right to live free!’

They continued Elsa’s rehabilitation, which eventually paid off. After returning to the wild, Elsa produced three cubs of her own, which she subsequently showed them. For the stars of the film, Virginia McKenna and her late husband Bill Travers, making the movie was a life-changing experience. They were so concerned by the growing human population and resulting conflicts with wildlife that they created the Born Free Foundation – together with their son Will Travers – to help keep wildlife in the wild, to help wild animals live free.

Even now, Virginia, a spritely 88-year-old, continues to be a resilient and motivating force, encouraging all of us to make a sustainable difference in the safeguarding of our environment. I accompanied her and Will on an anti-poaching patrol into Meru National Park in Northern Kenya to experience first hand the spiritual home of the Born Free Foundation. 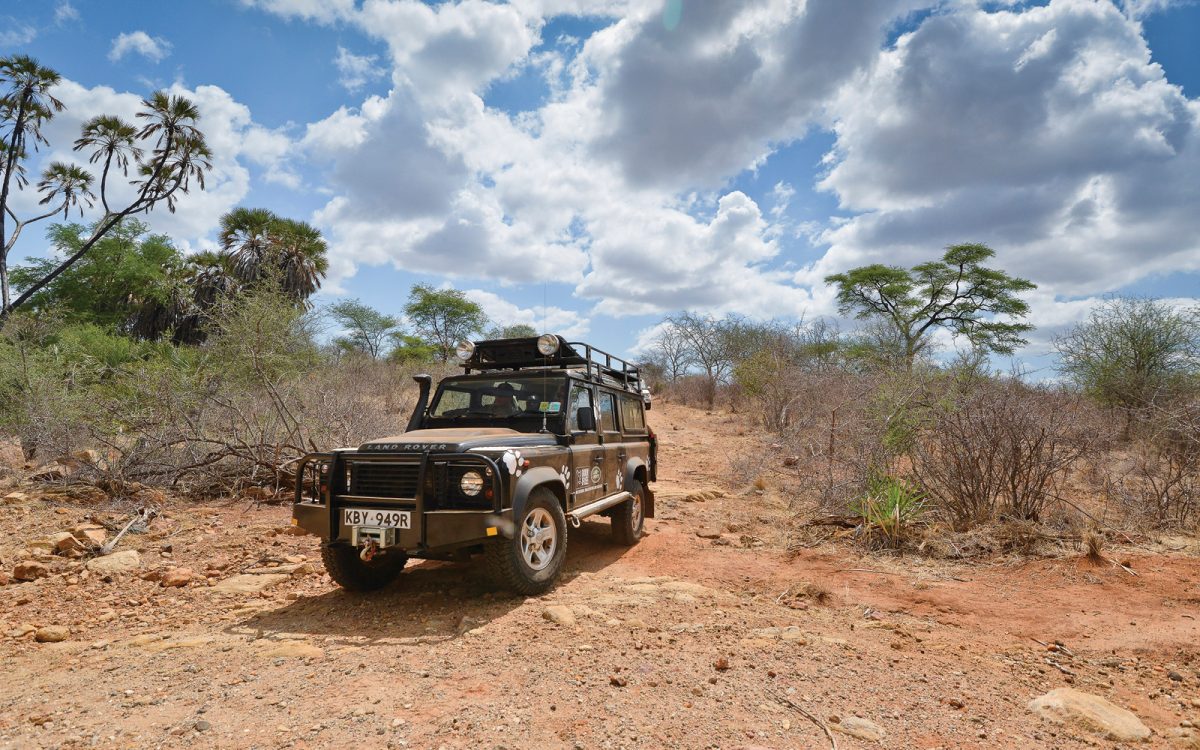 While driving Virginia and Will through the vast Tana River Basin in a Land Rover Defender, we encountered a rugged, wild and oft inhospitable 870km² mix of ochre savannahs, doum palm trees and thorny acacias, all sustained by the sparkling rivers in this key conservation area.

This is the kingdom of the lion, a kind of ‘Pride Rock’ of Africa, and the very place where the Adamson family famously raised and released Elsa the lioness back to the wild. ‘We are on the front line of conservation and wild-animal welfare, and to get us into and out of some truly challenging locations we rely heavily on Land Rovers to successfully complete our missions,’ says Will.

Will is a notable thought leader on conservation but is practical and realistic. ‘We can’t solve these complex issues alone; we have to solve them together,’ he says. ‘In particular, we are absolutely opposed to the cruel practice of canned hunting. More than 8 000 captive-bred lions and other predators languish in 260 breeding facilities [across South Africa], where they’re exploited for profit at every stage of their lives. Many of the animals will end up killed by trophy hunters. The volumes are terrifying.’

The Born Free Foundation is making a real difference in the rescue, care and protection of big cats and other endangered species and in spreading awareness on how to adapt attitudes and habits towards a more sustainable future. Lions need that right now: there were 200 000 lions in the wild in Africa when Born Free was made in 1966; there are just 20 000 today.

The foundation advocates that people see the world as a whole, with humans being a part of the broader animal kingdom. ‘It is only in this way that we can prevent the complete destruction of our environment and perhaps, ultimately, of ourselves,’ says Virginia.

Then, as it is now, outstanding capacity and an all-terrain capability were needed to access wildlife in these most remote locations. Sensibly, Land Rover was the vehicle of choice in the Born Free documentary. Alas, the Defender is dead, so, long live the Defender.

Enter Sir Jim Ratcliffe, who plans to keep the spirit alive by building the Grenadier, a new rugged ‘Defender-style’ 4×4. ‘I’ve been a lifelong admirer of the original Land Rover, and when it was announced in 2016 the Defender was ceasing production, it left a gap that I believe we can fill.’ Meanwhile, Jaguar Land Rover are finalising plans for their own replacement of the much-loved Defender, due in 2020.