In the three decades since she was ‘discovered’, Esther Mahlangu’s Ndebele designs have been applied to fast cars and supermodels, footwear and aircraft. 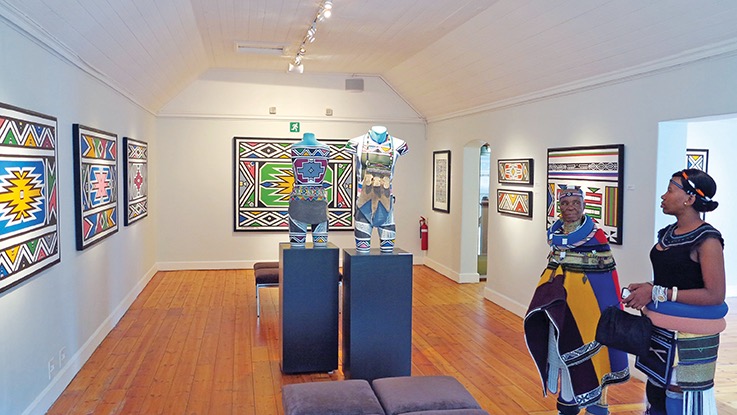 Esther Mahlangu has introduced the vibrant patterns of Ndebele design to the rarefied setting of the art world and achieved a level of international acclaim enjoyed by few South African artists. Her work, featured recently at a solo show to mark her 80th birthday at Cape Town’s Irma Stern Museum, also involves an element of performance. For example, she spent September 2014 painting two large-scale 4,5m-high canvases at the entrance to the African gallery of the Virginia Museum of Fine Arts in Richmond – clad in traditional Ndebele beads, bangles and blankets.

The Virginia residency was a powerful way of introducing US onlookers to the culture of an African village such as Mahlangu’s Mpumalanga home, and it received an enthusiastic response. Local school projects based on geometric Ndebele designs sprang up, while Mahlangu would stop to talk to her audience, who tweeted their appreciation.

The catalogue accompanying the Irma Stern Museum show quotes the reaction of Virginia street artist Andre Shank aka Bombproof, who likens Mahlangu’s career to the late American graffiti artist Jean-Michel Basquiat’s rapid rise from homelessness to gallery darling. ‘Her story is a fairy tale… some no-name nobody from nowhere that was just doing it because they loved doing it and then, all of a sudden, people decided that their work was special.’

Mahlangu’s biography is, indeed, as striking as her artwork. She was well into her 50s when the establishment came knocking. Growing up in the 1940s, she learnt at the hands of her mother and grandmother to create the austere designs that decorate Ndebele homes, using her fingers, brushes made from chicken feathers or bobbejaanstert (Xerophyta retinervis, or black-stick lily), coloured clay and cow dung.

Decades later, French researchers who visited her home village of Weltevrede, northeast of Pretoria, were so impressed by the walls of her house that she was invited to recreate the design in Paris, for the Pompidou Centre’s landmark Magiciens de la Terre exhibition of non-Western art in 1989.

She had never been overseas or travelled by plane before and could barely speak English – let alone French – but her concerns were allayed by being allowed to take her son and check in a 50kg bag of mealie meal. When she reached Paris, she set to work covering the walls of an exact replica of her homestead, minus the thatch roof, with interlocking Ndebele symbols, attracting thousands of spectators and wide media coverage.

A BMW Art Car soon followed, and subsequent commissions included a mural in collaboration with US minimalist Sol LeWitt at the Lyon Biennial of Contemporary Art in 2000. Mahlangu’s designs have added Ndebele flair to the tail of a British Airways Boeing, a Fiat 500, stilettos by Brazilian brand Melissa, and a high-end sneaker range by Swedish shoemaker Eytys. Her murals have appeared everywhere from Joburg Theatre to the Virgin Megastore on Times Square, and she painted supermodel Iman white and blue for US lifestyle magazine Town & Country.

Despite her international travels and experimentation with new materials, Mahlangu’s simple and traditional village life is largely unchanged. The octogenarian can normally be found pottering around her lapa barefoot, tending her small patch of maize and, in time-honoured Ndebele fashion, passing on her artistic knowledge to local girls, including her innumerable grandchildren and great-grandchildren. All of which is, of course, part of her persona – as with the great modernist icons, from Salvador Dalí to Andy Warhol, the myth of Mahlangu feeds into the power of her art.

Mahlangu is generally regarded as the greatest living Ndebele artist, but it is difficult to place her in the South African canon because she has achieved greater recognition overseas. Andries Loots of 34 Fine Art Gallery, which represents Mahlangu, believes her closest comparison is the late New York street artist Keith Haring, who also designed a BMW Art Car, collaborated with many brands and body-painted supermodel Grace Jones. ‘Mahlangu’s work is represented in all the major international museums and her association with brands is what every contemporary artist strives for, as that creates interest and the artist ultimately becomes a brand,’ says Loots.

Mahlangu’s work was priced at about R25 000 at the Irma Stern Museum show – making the Ndebele doyenne an interesting investment.

Esther’s BMW Art Car will be on display at the British Museum’s South African art exhibition (27 October 2016 to 26 February 2017).