Why is it that with any form of architectural brick-and-mortar wonder – even the most lavish and opulent – it must, in fairness, always give way gracefully to a hero view. This is what sells and seduces. Private Edition selects a handful of view ‘icons’ that make you deeply and madly desire to be there – or own it –  even for a moment. 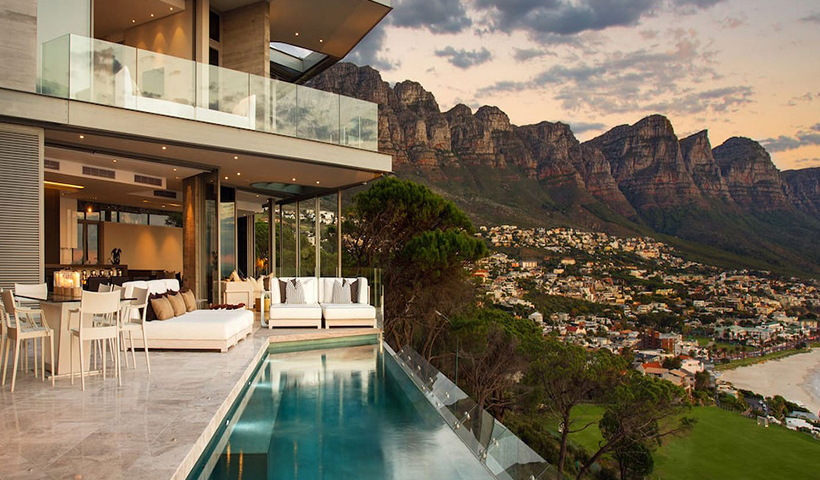 On one of those evenings when Cape Town stills as if holding its breath and the late, late summer is suspended in 25°C mode, 5 Nettleton Road seems to float above the ocean unanchored by the cliff face it has carved. While any architectural description of the Stefan Antoni design will give you the list – a Zen garden of stone, water and wood; an infinity pool suspended by architectural magic over a void; vast bedroom suites; and linear genius, modernity and innovation – it is the entertainment level that frames the magical shot of sea and sky. No 5 is famous Nettleton Road’s starship. Open to 180 degrees of glassy ocean and the last green flash of a setting sun, the early evening is this property’s crescendo. Later that night, the butler slips a tall bank of sliding glass doors across the expanse of the entertainment area against the chill and midnight ocean. From a level above, bedrooms share the view and your last thoughts are of flying. 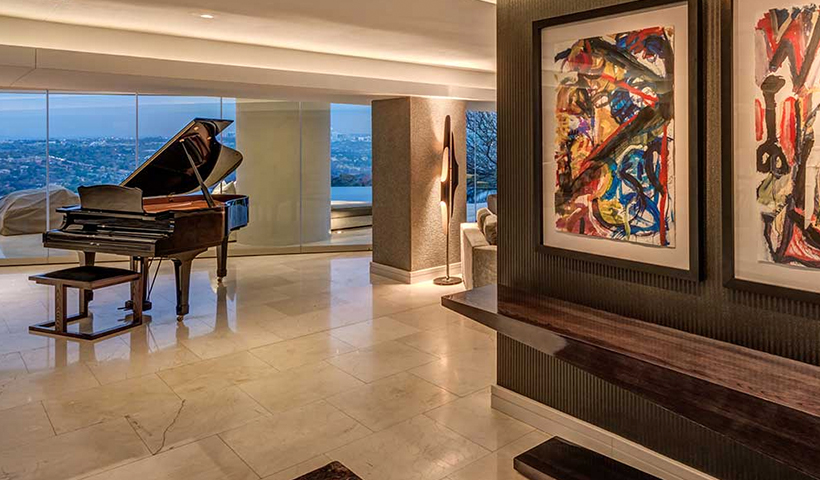 A drama in two acts

With an exceptional architectural blank canvas and a mesmerising cityscape, interior design rises to the challenge.

You can’t beat nature when she offers up a framework that could almost steal the show. But rather than fight it, interior designer Wanda-Michelle Hadlow, managing and creative director of WMI, describes how she embraced this panoramic view. ‘Despite being ever-present, the view offers a breathtaking new perspective every time you take it in: it can be crisp and clean, hazy and hot, elegant at night with the millions of lights punctuating the skyline or powerful in a storm. How could one not be inspired to reflect all of this, advance it and embrace it?

‘The strong, dramatic lines of the architecture and large unstructured spaces are a natural framework for my preferred style,’ says Wanda. ‘I love creating “closed-down” spaces within an open expanse, offering a welcome reprise of comfort and cosiness quite often lacking in such environments. Each piece was designed and placed specifically to shine in its own right, yet also to blend and float into the background, almost mirage-like, becoming a part of the painting – the backdrop – that frames the lifestyle that this space offers.’

Visit wmi.co.za to find our more.

This story begins with a small adventure. Coaxed to Mozambique by a friend passionate about this area of Africa, our writer sets off to explore one morning.

‘As an independent person,’ she says, ‘I decided to take a long walk early in the morning, going first through kilometres of big baobabs and large palm trees. I could feel the presence of the sea and decided to walk in that direction. After climbing a dune, I was met with an amazing view. A few mother whales and their offspring were jumping out of the water just in front of me. I will never forget this image. It was so beautiful. I learned later that whale mothers make their way here every year to give birth. And I said to myself, this is paradise.

‘At the end of my stay, I discovered that this special place, Praia Das Rochas, was for sale. I didn’t know this when I first arrived. I was leaving the next day, but I made the decision in just an hour. I wanted to own Praia Das Rochas, those 22 000m² of golden beachfront beaches, sea caves and coral reef. I wanted to swim there with my children and dive and snorkel.’

But circumstances change and the property on the sandy shores of Pemba in Northern Mozambique (a mere 26km from Pemba Airport) is now waiting for the imagination and vision of a new owner.

Inspired by architect Ian Gray’s eye for detail, composition and materials, the current owner had enlisted him to design a unique place for her.

‘The foundations are partly laid and local natural materials have been sourced for a luxurious lodge that optimises the spectacular location and seamlessly harmonises with the stunning natural surrounds,’ she explains.

The existing plans are for a five-unit lodge, but Gray says that there is potential for considerably more development on the site. All the groundwork and research has been done, so the new owners need simply step in and instill their personal style on the project. The buyer will have full access to the approved plans by architect Ian Gray as well as the relevant permits that have been granted.

For further information on this magnificent property, visit sothebysrealty.co.za.