Pilgrimages offer weary tourists a chance to reconnect with nature and themselves. And doing so on foot at Gondwana may just be the next post-Covid-19 travel trend. 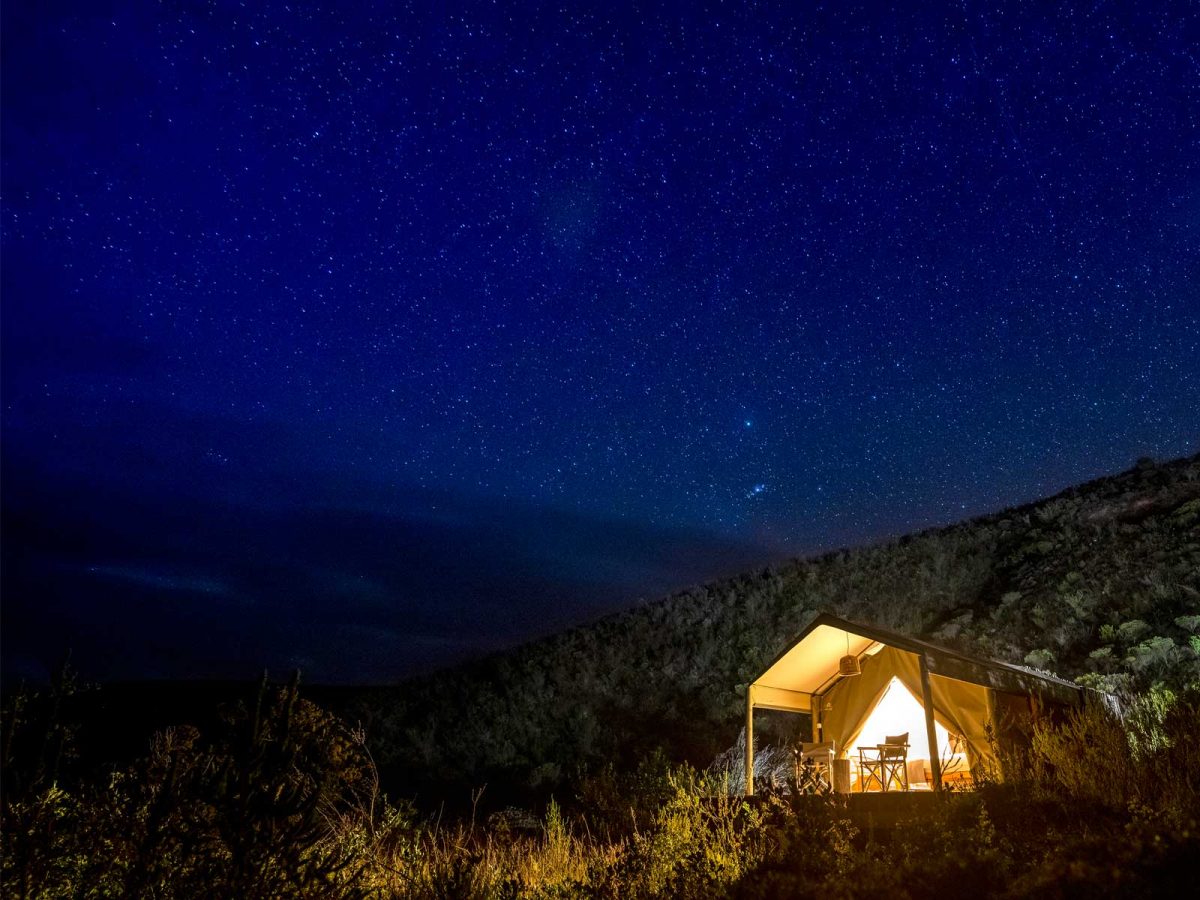 It has been said there is no better way to experience nature and wildlife than on foot. I would add there might be nothing more rewarding than standing on top of a steep incline and looking back over the vast landscape you’ve traversed that day. In this case, 14kms of indigenous fynbos that, across valleys and hills, has taken you within heart- racing proximity to eland, kudu, zebra, giraffe and even buffalo and rhino – 20 metres to be precise.

Gondwana’s three-night award-winning Pioneer Trail must certainly be one of South Africa’s most luxurious overnight hiking experiences. With only a light day-pack to worry about, the rest is taken care of by a team of chefs and guides who ensure you get the best of nature while enjoying the comforts of five-star hospitality. Traversing the 11 000 hectares of this private malaria-free Big Five game reserve takes you to three remote luxury tented camps where, after a day’s hiking, you can cool off under an outdoor shower and flop down on a comfy couch for a delicious afternoon high tea.

Afterwards, the night sky comes alive with stars and the sounds of the bushveld and you can sit around a fire in the camp’s boma and sip on a glass of chilled wine before be- ing served a three-course dinner. Luxury bedding allows a restorative sleep before you head off the following morning for another day of hiking and game-viewing. Two armed trail guides not only make you feel a sense of ease as you walk quietly past a rhino mother and baby but offer an enormous amount of knowledge about the land and wildlife, intimately exposing you to the reserve’s unique biodiversity. It is understandable why the Pioneer Trail has earned Gondwana the African Travel and Tourism Award for Most Compelling Adventure Story in 2021.

The story of how Gondwana came to be the only free-roaming Big Five reserve in the Southern Cape is equally inspiring. Former Pretoria Boys High School student Mark Rutherfoord always wanted to own a game reserve. ‘Growing up, my family was passionate about conservation. We’d spend holidays in the Kruger and Pilanesberg and as I got older and qualified as a game ranger, I became obsessed with getting into conservation and making it a viable career. I’d buy the Farmer’s Weekly magazine and look at the ads at the back of the magazine, imagining one day I’d create my own game reserve.’ 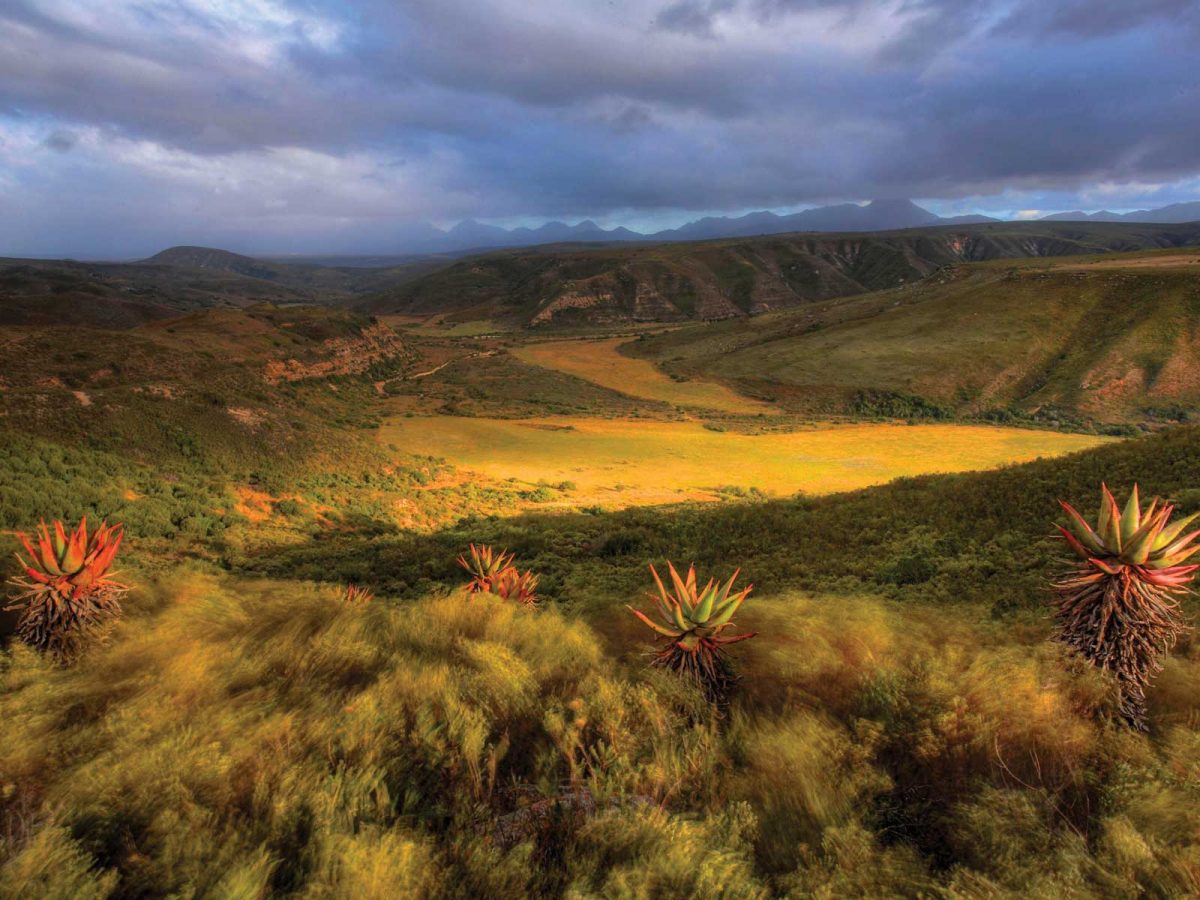 After earning a BSc Degree in Environmental Science, Mark continued looking at remote and unique spots in Malawi and Zambia where he could realise his dream. But things started to fall in place when he met his now wife, Wendy Trees. At the time he was working in the Kalahari Desert as a section ranger at Tswalu, and Wendy, an advertising executive from New York,
was part of a visiting De Beers business group. Four months after meeting, Wendy left the US and moved to the Kalahari and Mark’s vision became a joint venture. He recalls, ‘Wendy told me: “I love your idea but I think we should do it my way. It’s going to be hard to live remotely if we have a family.” And so we started looking for possibilities in South Africa.’

Initially they looked at the traditional spots like Mpumulanga and the Eastern Cape but they quickly realised these areas were oversaturated. ‘But nothing was happening in the Southern Cape. There were simply no authentic game reserves,’ Mark says. ‘We originally looked at the Karoo but then came across a property on the Garden Route close to the ocean – not where I expected to start a game reserve! But it started to make sense.’

Mark says it’s been good to have Wendy’s opinion – being from the US she had a tourist’s perspective and understood that the location and proximity to Cape Town could really work. ‘We’ve realised that, as long as you make it authentic and true to what it is, it will work. We’re embracing the fact it’s a Cape safari. The fynbos biome is the most endangered biome and also the smallest plant kingdom in the world. We’ve got this unique opportunity to restore it to its former glory.’

They’ve also found stocking the reserve with the correct types and numbers of animals to be important. But after trial and error Gondwana is now a natural Big Five reserve. ‘It’s been the most wonderful journey watching the transformation of this land from hard-hit ostrich farmlands to this wild indigenous area.’ Mark says.

The success of Gondwana Game Reserve can also be attri- buted to the changing trends in tourism. ‘People want to have a deeper experience. Five years ago we started offering guests the opportunity to play a bigger role in conservation while they’re here. At the Eco Camp, guests can literally become game rangers for the duration of their stay, getting involved with water and dung analysis to participating in conservation-based activities.

The walking trail is an addition to this offering that will not only make you fall in love with walking but with the incredible beauty inherent in this part of the Cape while enjoying a safari experience.

If you’re looking for that lift, that time out, you literally need only ‘bring your boots’ and the trail team will do rest. 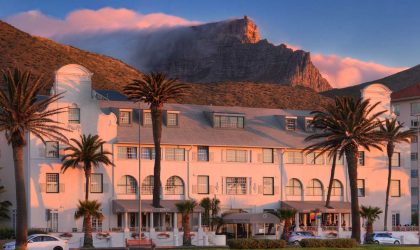