How Blancpain became king of the deep

When the Blancpain XFathoms launched in 2013, Hodinkee described it as ‘the most bad-ass, completely insane mechanical tool watch on earth’. 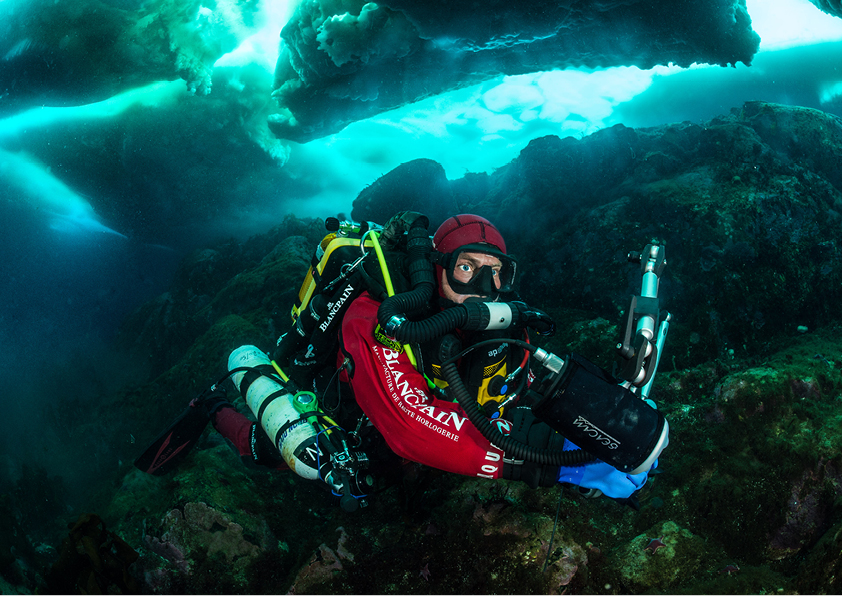 You could argue that only a professional diver with an equally insane approach to conquering unchartered territory in order to make new discoveries, document them and capture them on film could wear one. Award-winning underwater photographer and naturalist Laurent Ballesta is that phenomenon. The ‘insane’ part of the watch has to do with what fits into the 24cm case depth with its 55cm diameter – everything a serious diver would need underwater, particularly if the electronics fail, Ballesta explains.

Would you believe he doesn’t like to travel? ‘I could stay home if there was something to discover there. I’m happy in my little cabin in France, with the flamingos, and my wife and family around… but I’m curious and I love the idea of discovering something new in our little planet,’ says Ballesta. ‘If I think there is something to discover for the first time, suddenly I want to go.’

It doesn’t even take an unchartered territory or undiscovered species to get him excited. Simply the prospect of photographing new behaviour will do the trick. ‘If what we’re going to do will work, and people will enjoy it, we will consider it. And if we find something very interesting to do, that is sometimes dangerous, we’ll say no more than “we have to take care”. I think people understand that. We do not exaggerate,’ he says.

A case in point is his Gombessa Project, a scientific expedition and encounter with the coelacanth discovered in Sodwana Bay, supported by Blancpain. Known locally as Gombessa, this peaceful giant that measures two metres long and weighs about 80kg, was once thought to have become extinct 70 million years ago. But in 2000, diving the dark underwater canyons of Sodwana Bay, Peter Timm, Pieter Venter and Etienne le Roux disproved that theory when they discovered the fish at 104 metres.

It took Ballesta 10 years before his aptitude at those depths was convincing enough for Timm to allow him to dive to the depths frequented by this bottom-dwelling fish devoid of traditional vertebra. (It is seen as the ‘transition animal’ from backboned fish to the earliest four-legged vertebrate land animals.)

Photojournalist Scott Ramsay writes that Timm said a few weeks before his tragic death in 2014, going to another diver’s rescue in those same waters: ‘If you don’t know what you’re doing – and even if you do – you can end up dead very quickly.’ It’s no wonder Ballesta’s hesitant about a repeat exercise despite a request from the BBC. ‘We are very happy and proud of what we did, but these dives are so stressful, I’m not sure I will feel ready to do it again. It’s still quite dangerous, the dives are tough and tiring, and there’s no Peter Timm anymore.’

The only option is to find a better, safer way to stay underwater for longer periods, living in a pressure chamber like the commercial divers do, and only decompressing at the end of the expedition. ‘I will try to do this in France next summer,’ he says.