Lexus’ expression is a function of intention

Richard Webb takes the new Lexus LS for a drive and discovers that tradition is not the worship of ashes, but the preservation of fire.

Intention is a powerful force. Ask Koichi Sugo, chief designer at Lexus, who invites us to experience his. ‘I hope that when you open the door, you have an immediate sense that you are looking at an interior that’s unlike any luxury car you’ve seen before,’ he says in reference to the fifth-generation flagship LS 500.

While some of its competitors continue to put out relatively conservative designs, Lexus keeps on evolving. After all, that spindle radiator grille alone took three-and-a-half months of computer-driven, eight-hour days to perfect. That almost obsessive detailing continues throughout the car.

Aside from its invisible qualities of being relentlessly reliable and refined, a sensory theatre emerges as you approach the LS 500. Door handles illuminate and pools of light emanate from beneath the wing mirrors. The seatbelts present themselves as you settle into this most fascinating modern cabin that is infused with traditional Japanese aesthetics.

Delightful details abound, with variegated materials chosen to beguile the occupants. The flowing lines that run along the dashboard appear to connect with purpose, much like the strings of the koto, a traditional Japanese stringed instrument that inspired the design, which also features fixed and concealed fins that regulate and direct airflow in the vehicle’s interior.

Cabin temperature is maintained by the ‘Climate Concierge’, which uses 16 sensors to monitor occupants’ surface temperature and adjust the environment for optimum comfort. And if the almost total absence of noise needs interrupting, a Mark Levinson Reference audio system will surround you
in sound via 23 speakers. 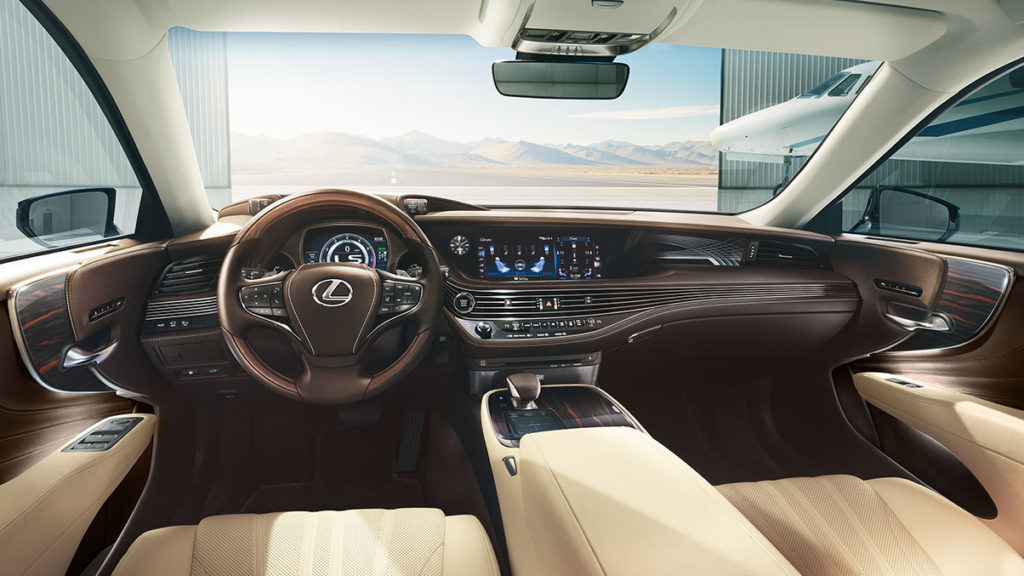 When on the move, the 24-inch heads-up display – the largest in the class – projects key information about your audio, speed, current gear and RPM onto the windscreen.

Driving agility is enhanced by adjustable dampers to reduce body roll, gifting it with composure and precision in long sweeping corners. But for me, I found the most rewarding drive was when I avoided the hustle and left it in the ‘Comfort’ setting. It feels right at home there.

Tradition is alive and well in the LS 500, then. But what about its fire? That comes courtesy of an all-new twin-turbocharged 3.5l V6 engine. It’s good for 310kW and 600Nm, all seamlessly delivered through a 10-speed automatic transmission. This kind of luxury is capable of 0-100km/h in 5 seconds, yet still delivers a real-world average cruising consumption of 9.5l/100km.

If Lexus’s intention was to make tradition and modernity intuitive bedfellows, they achieved this with the LS 500.