Jason deCaires Taylor’s underwater sculptures are a creative paradox. Designed to be absorbed by the ocean and transformed into living reefs, his work is an attempt at creating a connection between people and the fragile oceans. 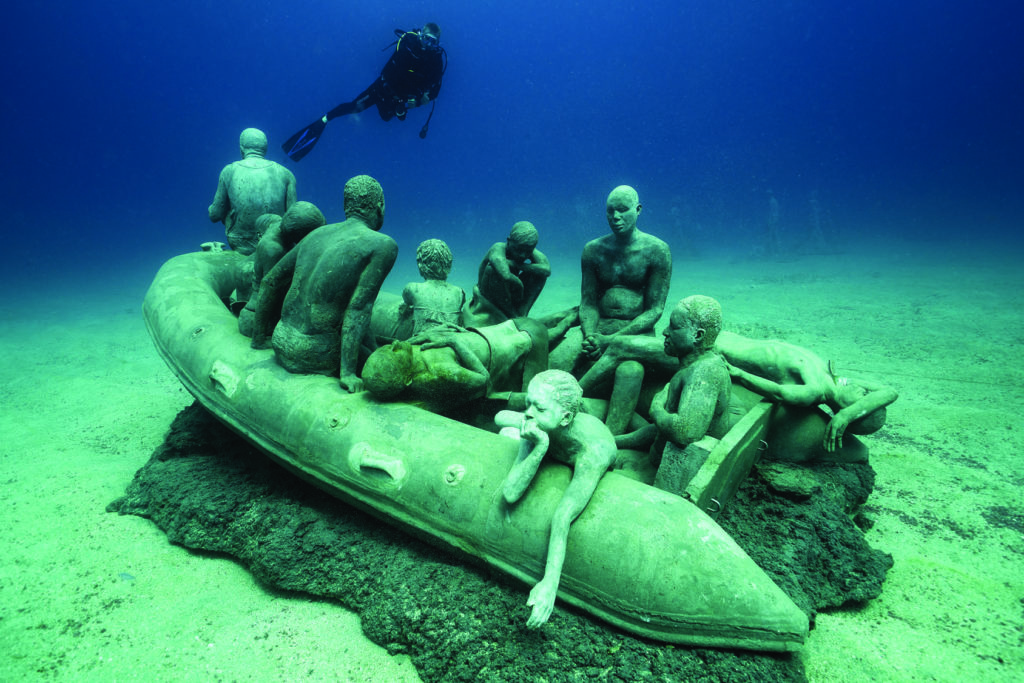 Created to protect the marine environment and to promote environmental education, the Museo Atlántico is a museum project designed by artist Jason deCaires Taylor. Twelve metres under water off the south coast of Lanzarote, in the Bahia de Las Coloradas, the museum site was chosen for its physical landscape and covers 2 500m2, which is accessible to divers. Ocean conservation is at the heart of Taylor’s work, and his collection will, over time, create an artificial reef made up of a series of pH-neutral concrete sculptures that will help marine life to flourish.

Taylor has worked as a diving instructor and underwater naturalist, and has won numerous underwater-photography awards for his dramatic images that capture the evolution of sculptures and the metamorphic effects of the ocean. In 2006, he created the world’s first underwater park on the west coast of Grenada in the Caribbean that was declared a protected underwater national area by the local government. In 2009, he went on to create MUSA, an underwater art museum near the coast of Cancún, Mexico, made up of more than 500 sculptures. His sculptures are designed to be changed by the sea and to evolve into living reefs, making each one unique and subject to the movement of the ocean and its marine life. Behind each piece is the desire to promote environmental awareness and inspire social change, as well as offer viewers the opportunity to appreciate the natural, powerful and ever-changing beauty of the underwater world. 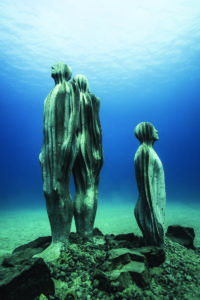 
The layout of the Museo Atlántico is designed along a route made up of 12 sections, beginning with Los Jolateros, which shows a group of children on brass boats. The sculpture makes reference to a local tradition and also represents a metaphor for the precarious future of our children. Next is a piece called Inmortal, a sculpture that was moulded using a local fisherman from La Graciosa island on the north coast of Lanzarote as a model. The figure rests on a stack of concrete sticks that represent a traditional funeral pyre.

The Raft of the Medusa, which depicts survivors who were abandoned by the ship’s officers when it ran aground in 1816 off the coast of today’s Mauritania. It is a comment on the current refugee crisis, paying tribute to those who have lost their lives in their journey across the sea. The shape of the boat is inspired by the dinghies on which many immigrants arrive at Lanzarote.


A little further along is Crossing the Rubicon, an impressive scene made up of 35 figures walking towards an underwater wall that represents a boundary between two realities and a portal to the Atlantic Ocean. The wall is 30m long and 4m high, and is made of a combination of industrial and organic materials. Intended to be a monument to absurdity, the piece shows how ownership and territories are irrelevant to the natural world. It aims to remind us that we cannot segregate our oceans, air, climate or wildlife as we do our land and possessions, and we are all an integral part of a living system.

A reference to the rich vegetation of Lanzarote is Hybrid Garden, which features sculptures that are designed to look half-human, half-cactus – a representation of nature and humanity living in harmony. The Portal depicts a hybrid of animal and human looking into a large square mirror that reflects the surface of the ocean. The concept of the artwork is intended to depict water within water, a kind of looking glass into another world. The mirror is elevated on a series of compartments designed to attract small sea creatures.

Human Gyre is where more than 200 life-size figures are placed in a circle. The structure forms a large, complex reef formation for marine creatures to inhabit and makes an effective statement, suggesting that we are all subject to the movement of the ocean – a poignant end to a fascinating series of installations.