McLaren 720S: the dawn of a new era for the McLaren Super Series

Lighter, faster, and even more dynamically capable with unparalleled levels of interior space and sophistication, the new McLaren 720S can validate its claim to be the most complete supercar on sale today.

“Super Series is the core of the McLaren business and personifies the blend of extreme performance, crafted luxury and unparalleled driver involvement that is the McLaren heartland. This is the first time we have replaced a product family and the new 720S is absolutely true to McLaren’s pioneering spirit in being a revolutionary leap forwards, both for our brand and the supercar segment.” -Mike Flewitt, Chief Executive Officer, McLaren Automotive. McLaren has renewed the Super Series product family at the core of its brand with the introduction of the new McLaren 720S, a car that sets new benchmarks for supercar excellence.

The 720S is a bold reinterpretation of McLaren’s design language. Rooted in aerodynamic principles applied to a beautiful form with nothing superfluous about it, the McLaren design ethos has produced some astonishing cars. The new 720S is undeniably a McLaren and perhaps the most distinctive and remarkable yet.

The new M480T engine powering the 720S continues the lineage of McLaren’s multiple-award-winning, twin-turbocharged V8 engine series. It generates a maximum of 720PS and up to 770Nm of torque, delivering astonishing levels of performance:

Owners of the new 720S will benefit from the most involving driver experience ever from a McLaren Super Series car, calling on huge reserves of grip, balance, and performance to enjoy the car to its full potential. Double the aerodynamic efficiency of the 650S and a new generation of McLaren’s Proactive Chassis Control combine with new suspension and the established power-assisted, electro-hydraulic steering to deliver a dynamic driving experience. And all while in a cabin environment that offers top standards in the supercar segment for visibility, space and comfort.

Together with a full complement of advanced convenience technologies, these attributes give the new McLaren 720S an incredible degree of usability and validate its claim to be the most complete supercar on sale today.

Beauty and technology in harmony

“The 720S is a new chapter in the development of McLaren’s design language; it has perfect proportions that bring our key design pillar of ‘Everything for a Reason’ together in one pure, aerodynamically shrink-wrapped and sophisticated whole. McLaren is always brave in its approach and this car is the perfect expression of that innovative culture.” -Rob Melville, Chief Designer, McLaren Super Series

McLaren engineers have capitalised on the inherent structural integrity of the carbon fibre Monocage II structure to deliver unusually slim windscreen pillars and glazed C-pillars that taper from the roof in a distinctive teardrop motif. The aggressively contoured front bumper takes its inspiration from the McLaren P1. Visually dramatic, digital LED headlights are integrated within ‘eye-sockets’ that feature an aero duct to channel air to the low-temperature radiators and cut deep into the front fenders to produce a distinctly predatory gaze. The new McLaren 720S is equipped with Static Adaptive Headlights, a pioneering technology that optimises headlight performance by changing the directional light intensity based on steering input.

McLaren’s determination to make the new Super Series as easy to live with as it is dynamically thrilling was at the heart of the development programme throughout. The sills of the 720S drop down dramatically where the occupants’ feet swing in and out of the luxurious cabin. The exquisite dihedral doors hinge dramatically forwards and upwards as they open, taking a portion of the roof in the process. The doors feature an 80-degree angle of opening and require 155mm less space per side than is needed to fully open the doors of a McLaren 650S. This increases accessibility when parked in tight spaces, especially in close proximity to a wall, and the doors also open to only 1,953mm high, an important factor in underground parking spaces.

“The carbon fibre Monocage II structure at the heart of the new McLaren 720S provides exceptional rigidity and strength with low weight, enabling the strikingly thin pillars that are key to the futuristic design and excellent cabin visibility. Overall, this is a car that combines technology and beauty in perfect harmony.” -Mark Vinnels, Executive Director – Product Development, McLaren Automotive 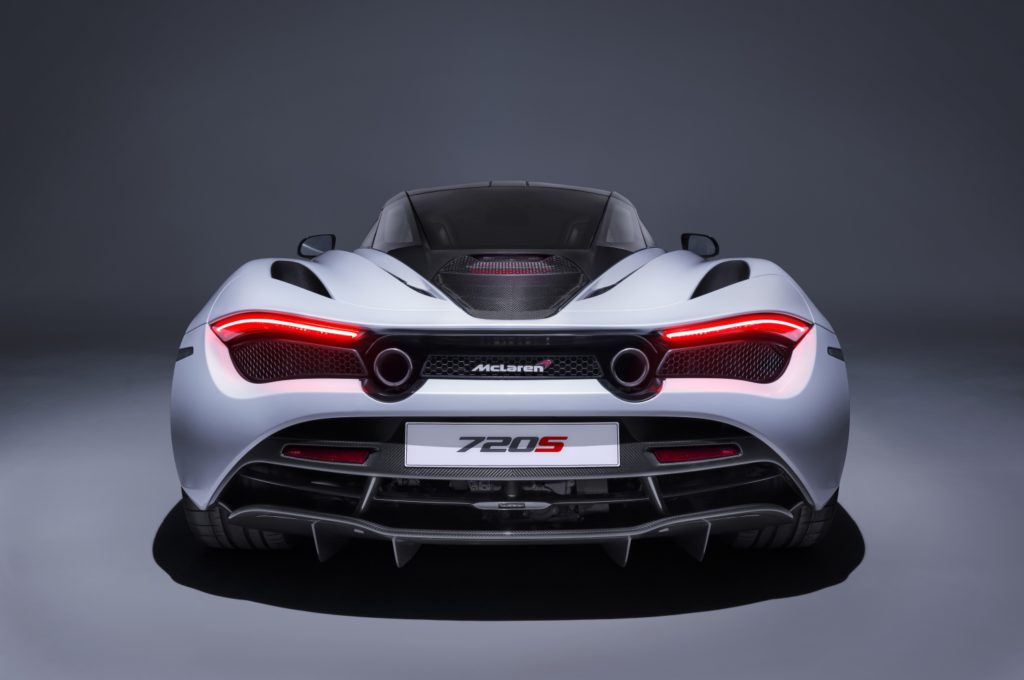 “The new 4.0-litre, twin-turbocharged, M840T V8 engine marks a revolutionary step forwards for McLaren, with lighter internal components and new twin-scroll turbochargers contributing to huge increases in power, response and efficiency. A 720PS engine that delivers just 249g/km CO2 in the NEDC is unrivalled in the supercar class, and beyond even our own ambitious expectations at the start of development.” – Haydn Baker, Vehicle Line Director, McLaren Super Series

Throttle response – both on- and off the throttle – has been calibrated to deliver the optimum blend of immediate reaction and progressive control, ‘hardwiring’ the driver to the powertrain and ensuring absolute connectivity and involvement. Under full acceleration, power delivery continues to build relentlessly throughout the rev range, encouraging the driver to hold each gear all the way through to a thrilling 8,100rpm in first and second gear and 8,200rpm in the next four gears. The characterful soundtrack from twin exhaust outlets has been engineered to deliver similarly intoxicating engagement, with a soulful, clean and crisp exhaust note achieved through a sophisticated balance of harmonics and delivering a crescendo characteristic according to engine rpm and load. A sports exhaust with a unique tailpipe design and an even louder and more emotive soundtrack is available as an option.