The miniature masterpieces of the SIHH

At this year’s Salon International de la Haute Horlogerie, there were highly innovative timepieces that played with the concept and very interpretation of time. 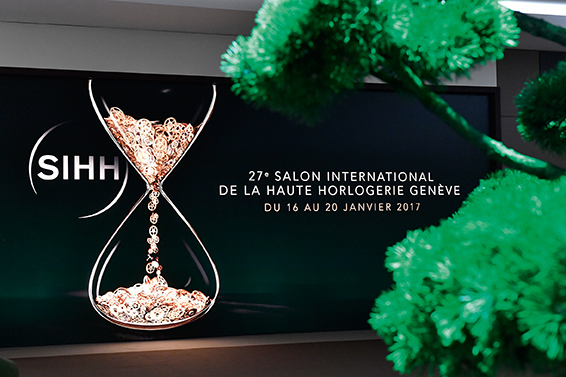 Looking ahead to what will most likely be another transition year for the fine watchmaking industry, Fondation de la Haute Horlogerie (FHH) chairwoman and managing director Fabienne Lupo predicts caution in terms of product offering. ‘Clients want simpler pieces that are more affordable. The brands have done great work, perhaps refocusing, getting back to the essentials of their collections to present products that embody their values completely.’ She was speaking at the Salon International de la Haute Horlogerie (SIHH) in Geneva, where some of the world’s best watchmaking innovators unveil new creations in January each year. Private Edition was part of a select group of journalists invited to be among the first to experience a range of novelties often years in the making, as well as popular product line extensions. ‘These births are incredible moments,’ says MB&F owner Max Busser, ‘when you finally show the product you’ve had so many doubts about.’

MB&F’s launch of the HM7 Aquapod, described as a horological jellyfish that glows in the dark, pays tribute to dive watches with its ceramic ‘oversized, floating, rotating bezel’. The mechanical sculpture of 305 parts was four years in production. The pod-shaped design with its transparent skin features a ‘brain’ under a sapphire dome, a tentacle-like winding 3-D rotor, a central flying tourbillon and a radially symmetrical movement that mimics the anatomy of the animal.

Busser says it was an incredible challenge to produce a final product that not only looked amazing but was also wearable. ‘Every time we come out with a new horological machine, social media goes crazy… The haters start talking and it’s horrible,’ he told an interviewer from TheWATCHES.tv. ‘But everybody seems to love it, which is very weird. I’m not used to this and I’m enjoying it a lot.’

The avant-garde Carré des Horlogers section of independent workshops, designers and watchmakers, of which MB&F forms part, grew this year with the participation of Manufacture Contemporaine du Temps, Romain Jerome, Ressence, Grönefeld and Speake-Marin. Among the ancestral maisons, SIHH founding member Girard-Perregaux returned to the exhibition and Ulysse Nardin joined for the first time. Both maisons featured among artisan-creator Vianney Halter’s top picks. For Halter, winner of the Prix Gaïa 2016, which is awarded for dedication to the measurement of time, innovation was a clear draw card. A ‘passionate young watchmaker’ showing the intricacies of Montblanc’s Heritage Chronométrie Exotourbillon Rattrapante grabbed his attention with his explanation of the movement and position of the balance wheel outside the cage. The advantage is in having a larger balance wheel, which is the timekeeping device in a mechanical watch, but saving a lot of energy because the cage is smaller. ‘Well done to the one who imagined it,’ says Halter.

Independent Finnish watchmaker Kari Voutilainen’s Vingt-8 ISO also gave him something to think about, which was precisely the point. The ISO is the kind of watch that forces the wearer to read the time rather than simply know it at a glance. The minute hand overlaps the hour hand. Every half hour, the hands are opposite each other. The angle between them is the same, no matter the time, while their position in relation to each other is always according to the minutes. The mind boggles. ‘Not the one to wear when you’ve got a plane to catch,’ remarks Halter, ‘because you’ll think you’re half an hour early when you’re actually 30 minutes late!’

Jaeger-LeCoultre posed a similar challenge by removing the hands from the dial of the Hybris Artistica mystérieuse. The wearer must tell the time by interpreting the tourbillon’s position on the dial in conjunction with the flange disc that shows the passing minutes. That’s if they can drag their eyes away from the rare artistic crafts demonstrated in the skeletonisation of both the front and back of the case of the five limited-edition pieces for men – or the intricate ivy-leaf decoration of the three unique pieces for women that took one craftsman six months per watch to complete.

Skeleton work also features in Cartier’s Rotonde de Cartier with its calibre 9983 MC, but for the first time in the same watch there is a mysterious movement as well. Instead of being directly linked to the movement, the hands are joined to two sapphire discs fitted with teeth around their circumference that, when activated by the movement, turn the hands – one disc for the minute hand and the other for the hour. And instead of hiding the movement beneath the dial, Cartier has revealed the gear train of the mysterious movement.

This year, both Greubel Forsey and Vacheron Constantin launched their first grande sonnerie watches with eye-watering price tags. As innovative as they are rare, this complication exists in the collections of fewer than 10 manufactures in the world. The Greubel Forsey Grande Sonnerie took 11 years in research and development (R&D). It comprises 935 parts in a 43,5mm diameter and 16,13mm high case, and can be set to three modes – the grande sonnerie (which strikes the hours and quarters), petite sonnerie (which strikes the full hours) and silence. The maison prefers not to talk price, so we wait until somebody asks tentatively, ‘The value then?’ That would be CHF1 500 000 (R20 243 815,48). Excluding tax. It does inspire a sharp intake of breath.

At a fractionally lower cost, around CHF1 million, Vacheron Constantin’s Les Cabinotiers Symphonia Grande Sonnerie 1860 was a decade in the works. Its grande sonnerie, petite sonnerie and minute repeater complications are housed in a case measuring 37mm wide and 9,1mm deep, transparent at the back to admire the striking mechanism. Vacheron Constantin offers investors the opportunity to customise the case and dial through their bespoke department, which could increase the price.

At just short of a million Swiss francs, Richard Mille launched the lightest mechanical chronograph ever in its RM 50-03/01 Tourbillon Split-seconds Chronograph Ultralight McClaren F1 of which 75 numbered, limited-edition pieces will be available through Richard Mille boutiques. The result of ‘relentless technical innovation’, the 600 parts weigh less than 40g, including the strap. The movement alone weighs 7g. The secret? It’s in the materials combination of titanium, carbon TPT and graph TPT (graphene).

Roger Dubuis nailed the innovation theme too, releasing three world premieres in choice of material. The Excalibur Cobalt Quator Micromelt, a visually striking piece in cobalt chrome with white gold, cobalt blue and red accents, features the cobalt chrome alloy used in aeronautics and astronomy. ‘Don’t simply look at the piece,’ they said. ‘Listen to it. It’s like a symphony. The hand-wound 590-part RD101 Quatuor movement – beating at a frequency of 4×4 Hz (115,200 vph) with its four sprung balances and five differentials creates the sound of engines.’

At the start of the fair, one of the eight pieces was presumed sold at CHF 390 000 (R5 253 627,61). The investment in the pieces described here is as extraordinary as the creations.