The Museum of Modern Art presents Items: Is Fashion Modern?, an investigation of 111 garments and accessories that have had a profound effect on the world over the last century, on view October 1, 2017, through January 28, 2018. 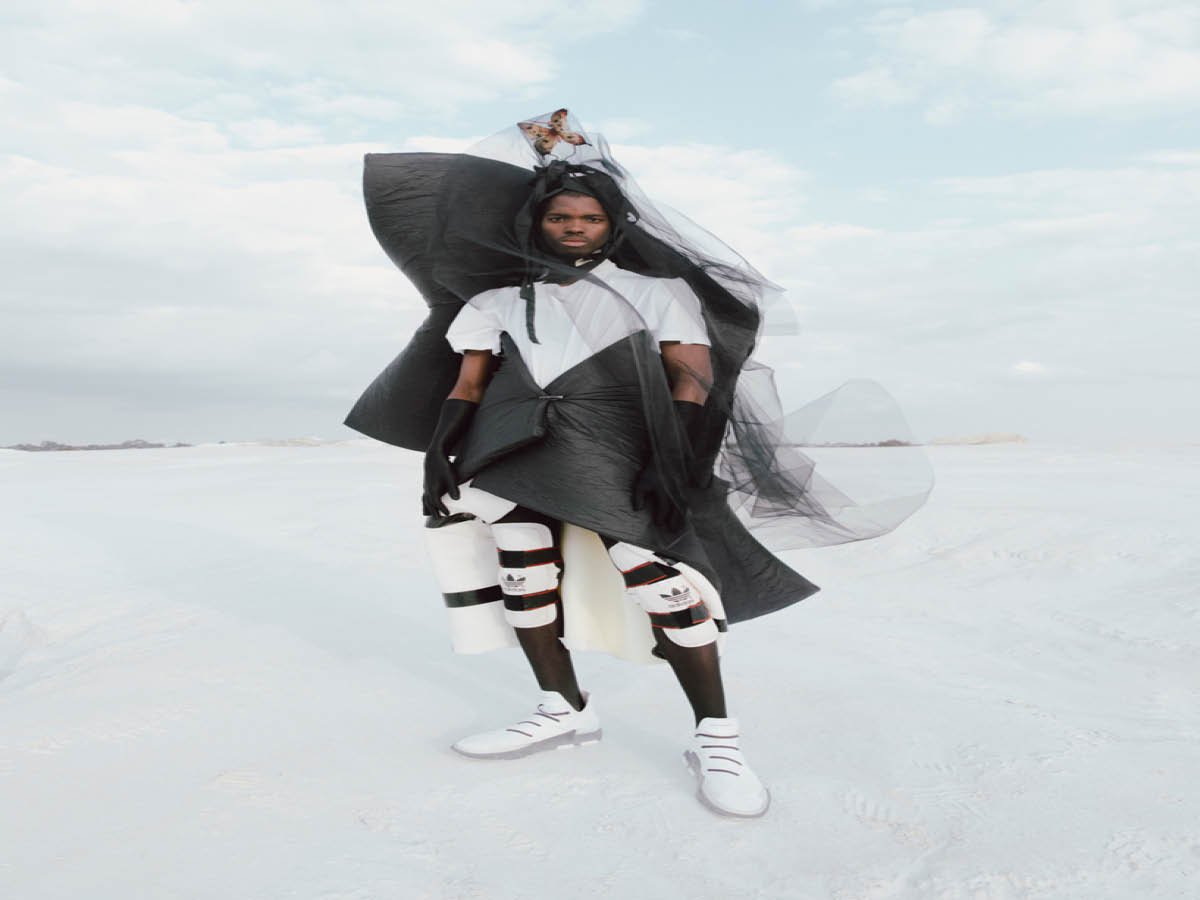 Filling the entire sixth floor of the Museum, the exhibition explores fashion thematically, displaying 111 powerful and enduring manifestations of the ways in which fashion—a crucial field of design—touches everyone, everywhere. Like other forms of design, fashion exists within a complex system that involves politics and economics as much as it involves style, technology, and culture. The exhibition examines this complex system using each item as a lens. The 111 typologies are presented in the incarnation that made them significant in the last 100 years (the “stereotype”) alongside contextual materials—images or videos—that trace each item’s history and origins through to its archetypal form. Several concept items (the Little Black Dress, for instance) are represented by more than one example in order to fully underscore the breadth of the concept’s impact, bringing the actual total number of objects in the exhibition to around 350.

About 30 items will be complemented by a new prototype—a commissioned or loaned piece inspired by advancements in technology, social dynamics, aesthetics, or political awareness. Items is organized by Paola Antonelli, Senior Curator, Department of Architecture and Design, and Director of Research and Development; and Michelle Millar Fisher, Curatorial Assistant, Department of Architecture and Design, The Museum of Modern Art.

The title of the exhibition reprises the question that architect and curator Bernard Rudofsky raised with his 1944 MoMA exhibition Are Clothes Modern?, which is the only other instance of MoMA fully addressing this field of design. In his exhibition, Rudofsky explored individual and collective relationships with mid-century clothing in the waning moments of WWII, when traditional attitudes still prevailed, women still poured their bodies into uncompromising silhouettes, and menswear still demanded superfluous pockets, buttons, cuffs, and collars. For the Items exhibition, Rudofsky’s question provides a springboard (and a foil) from which to consider the ways in which fashion is designed, manufactured, marketed, distributed, worn, and disposed of today.

“A powerful form of creative and personal expression that can be approached from multiple angles of study, fashion is unquestionably also a form of design, with its pitch struck in negotiations between form and function, means and goals, automated technologies and craftsmanship, standardization and customization, universality and self-expression,” said Antonelli. “Like all physical and digital forms of design, it moves today on a spectrum ranging from post-industrial seriality (from prêt-à-porter to fast fashion) to precious, handcrafted uniqueness (couture). As design, it exists in the service of others. In most cases, it is designed by a human being to dress others—sometimes many, many others—so that they can function in the world, in different arenas.” 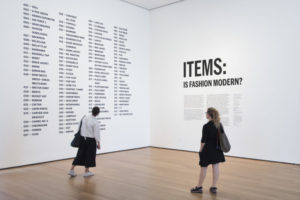 The items are loosely grouped throughout the galleries, in order to provide both deliberate and accidental adjacencies as the public moves through the exhibition. The installation begins with an area devoted to the mutating idea of body and silhouette, highlighting issues of size, image, and gender with examples of the Little Black Dress, the Wonderbra, the sari, and Rudi Gernreich’s Unisex Project, among many others. The exhibition then moves into a zone devoted to new technologies and visions of the future, bringing together experiments such as Issey Miyake’s A-POC and Pierre Cardin’s Cosmos Collection along with Gore-Tex, the leotard, and Moon Boot. A middle gallery is devoted to a study of the relationship between emancipation, modesty, introversion, and rebellion, which paradoxically share many common fashion traits. Introduced by the hoodie and the turtleneck, the section includes items as diverse as leather pants, the slip dress, the bikini, the hijab, and kente. Following is a section devoted to items whose foremost function is to deliver a message, whether explicitly—as in a graphic T-shirt, a tattoo, and a bandanna—or implicitly, as in a Birkin bag or a diamond engagement ring.

A section dedicated to the myriad ways fashion and athleticism have intersected over the past century includes sports jerseys, streetwear staples like the polo shirt, classics like Converse All Stars, and revered high-fashion collaborations like Yohji Yamamoto’s Y-3. From there, the exhibition flows into a section dedicated to everyday uniforms, featuring such humble masterpieces as the Breton shirt and Levi’s 501s, professional attire such as the pencil skirt and loafers, and applications of the multipurpose Dutch wax. Finally, the exhibition’s conclusion interrogates the concept of power with, among others, a selection of suits, Donna Karan’s Seven Easy Pieces, stilettos, and the pearl necklace. At the close of the exhibition will be a data visualization by the information designer and Accurat founder Giorgia Lupi—in collaboration with Glasgow Caledonian University in New York’s Fair Fashion Center—which will reveal hidden connections and patterns within the 111 items and will show the macroand micro-level role of the viewer in the systems of fashion and sustainability.

As part of the exhibition, some designers, artists, scientists, engineers, and manufacturers have been invited to respond to some of these “indispensable items” with pioneering materials, approaches, and design revisions—extending this conversation into the near and distant future, and connecting the history of these garments with their present recombination and use. These prototype designers include both emerging and established figures in the fields of fashion, design, science, and technology. A few (nine individuals or studios) have provided pre-existing work, but the majority (19) have been commissioned to create for Items original work that engages a future need, speculation, or desire that fashion might fulfill. Participants include Laduma Ngxokolo (South African) with the Aran sweater; Verbal and Yoon (Korean, lives in Japan) with the Cartier Love Bracelet; Pia Interlandi (Australian) with the Little Black Dress; Unmade (British) with the Breton shirt; Kerby Jean-Raymond of Pyer Moss (American) with Pierre Cardin’s Cosmos Collection; Chen Zhi (Chinese) with the pencil skirt; and Lucy Jones (Welsh) with tights.

Also part of the installation are four sculptures by Costantino Nivola, commissioned by Bernard Rudofsky in 1944 for the MoMA show Are Clothes Modern? (lent by the Brooklyn Museum.)

View the full list of items included in the exhibition here.

Fashion as Design: online course
In conjunction with Items: Is Fashion Modern? MoMA offers Fashion as Design, our eighth free massive open online course on Coursera. Fashion as Design focuses on a selection of more than 70 garments and accessories and explores their profound impacts—social, cultural, economic, and environmental—on the world. Learners will hear from a range of designers, makers, and historians, gaining new and unexpected perspectives on clothing and a better understanding of the choices they make about fashion. The course launches September 26 and the first session begins October 2. Click here to find out more