From the inception of the marque 113 years ago, Rolls-Royce Motor Cars has stood alone in serving the world’s wealthy and influential an exquisite blank canvas from which to express their tastes, lifestyles and passions. 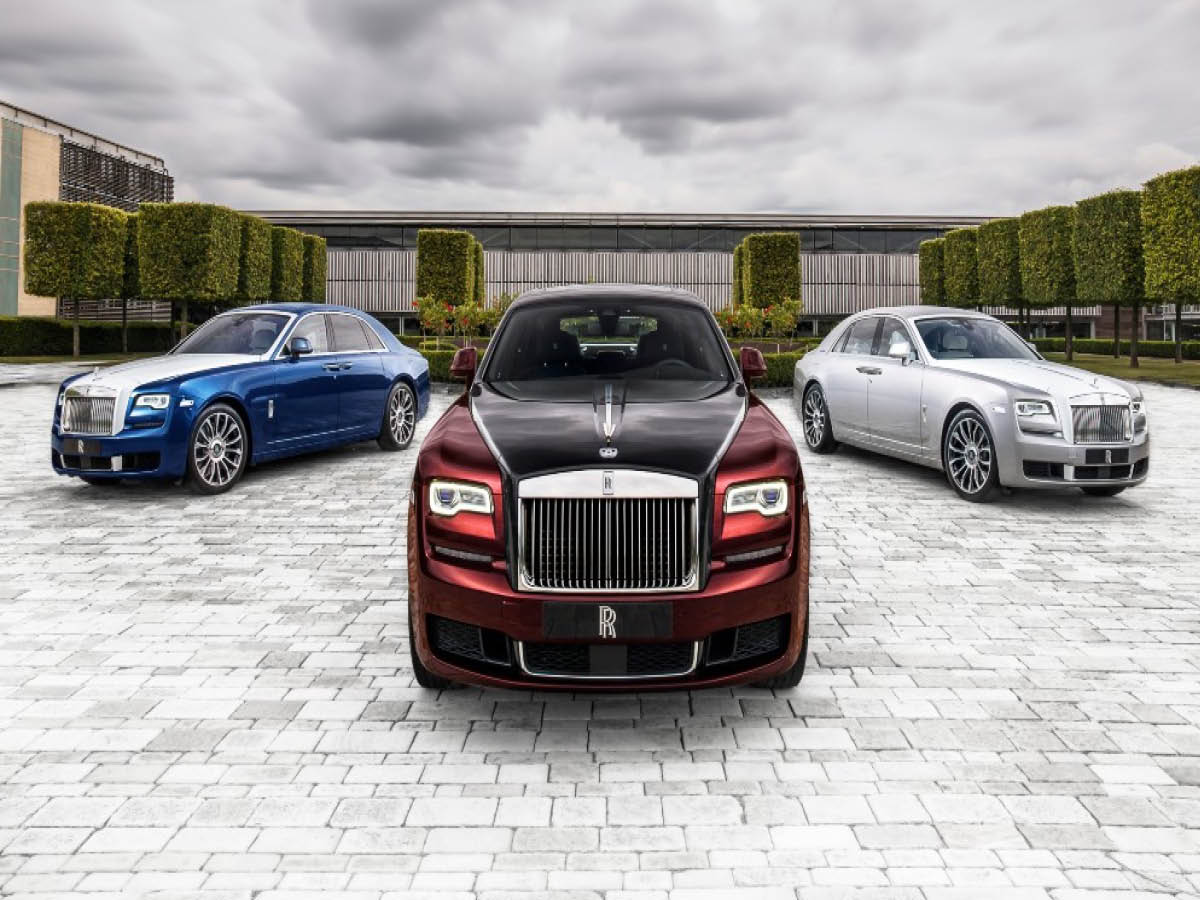 Where once this fell to independent coachbuilders, the execution of the most deeply held desires of the most discerning patrons of luxury in the world is now performed by the marque’s Bespoke department, a collective of extraordinary designers, engineers and craftspeople at the marque’s centre of excellence in Goodwood, England. Today, practically every motor car that leaves the Home of Rolls-Royce in Goodwood, England is Bespoke. What follows is a small snapshot of some of 2016’s finest examples of Bespoke design and craftsmanship.

This approach is driven by Rolls-Royce’s founding belief that true luxury houses must intimately understand their patrons to execute their boldest visions at the hands of master craftspeople. True luxury is therefore deeply personal and commissioning a Rolls-Royce a process more akin to the creation of a work of art. For our customers, it is an act of patronage.

It is this commitment to empowering its patrons to create the world’s finest objects in their own image that defines Rolls-Royce’s position as a true luxury house. A philosophy exquisitely expressed throughout 2016, a remarkable year of creative endeavour for the marque’s Bespoke department.

“Rolls-Royce patrons live in a world beyond material acquisition, indeed they seek to commission, curate and collect. This is why they come to houses like Rolls-Royce to commission deeply personal luxury items, knowing this will be executed at the hands of the world’s most skilled artisans. In commissioning these extraordinary objects in close collaboration with our designers they create a timeless legacy, often profoundly inspired by the most important moments in their lives,” said Torsten Müller-Ötvös, Chief Executive, Rolls-Royce Motor Cars. “Rolls-Royce will never stray from this path, ensuring the precious relationship between patron, house and artisan is never derogated by proliferation. This unique approach is beautifully expressed in just a small collection of some of the remarkable commissions executed at our centre of global excellence in 2016.”

Naturally, in its final year of production connoisseurs and collectors were moved to commission stunning examples of the seventh generation Phantom – these promise to take pride of place in some of the most significant collections in the world.

As Phantom Coupé and Phantom Drophead Coupé prepared to leave the stage in 2016, the marque’s patrons were invited to commission just 25 final examples of each body-style. These stunning motor cars elegantly celebrated the manner in which these extraordinary motor cars augment the lifestyles of the most discerning patrons of luxury in the world. In hallmark Rolls-Royce style, every possible comfort was considered. For example, enhancements to the rear-split tailgate included a meticulously engineered and crafted glass-shelf from which to serve champagne, whilst the luggage compartment proved the perfect staging point for a civilised rest-stop when touring. Flourishes like the addition of champagne fridge, large enough to hold two bottles and eight Rolls-Royce glasses served to demonstrate Rolls-Royce’s unique understanding of its patrons.

As a final touch, the central fascia drawer is used to house a priceless memento signifying each car’s status as one of the very last. On opening, owners discover a removable polished aluminium case, laser engraved with their motor car’s unique identification number surrounded with a beautiful application of Best English Blacking – a technique most commonly associated with fine gun-making. Within this sits a piece of automotive history, not attainable by any other means; a single piece of the seventh generation Phantom’s Assembly Line at the Home of Rolls-Royce in Goodwood, England. This remarkable collectors’ piece is completed with the expression of co-ordinates, stating the exact part of the Assembly Line from where the metal was extracted.

Extraordinary detail and application – The Peace and Glory Phantom

One of the final Bespoke commissions of the seventh generation Phantom Extended Wheelbase was crafted for an entrepreneur in the Far East, showcasing the ingenuity and application of the marque’s craftspeople through the art of embroidery. In this instance, they exquisitely replicate the pattern of tiger fur in the rear centre console. Beyond that, this stunning example features a wealth of unique interior fittings, echoed with a subtle gold coachline and motifs on the Madeira Red exterior. The cabin of this Phantom is furnished in a two-tone design of Moccasin and Fawn Brown leather, and is embellished with multiple personalised motifs stitched into the hide and laid into the veneer, all by hand. Bespoke white instrument dials contrast with a Consort Red steering wheel rim – elegantly expressing the breadth of colour palette at the disposal of the marque’s patrons when creating truly unique Bespoke commissions.

Cultural emblems and stories so often inform the vision of the marque’s patrons, as beautifully displayed in this commission by a gentleman in Taiwan. This elegant Phantom Drophead Coupé was one of the very last built and incorporates a number of Bespoke features of regional significance. The exterior is finished in Silverlake with an Andalusian White bonnet and an engraved Spirit of Ecstasy in gold. Hints of gold are also incorporated in the Bespoke twin coachlines and the pinstripes circling the wheel centres. The headrests are embroidered with an illustration of the blue magpie, a bird which can only be found in the owner’s homeland of Taiwan, while Mother of Pearl inlays sit within the veneers, instrument dials, clock and control knobs. Attention to detail even extends to the floor of the car’s luggage compartment, which is is uniquely finished in teak with white maple inserts.

Dawn, Ghost and Wraith equally serve as the perfect canvas for the most discerning patrons of luxury in the world. This has driven Rolls-Royce’s Bespoke department to its most successful and creative year in history.

US collector Michael Fux, a connoisseur collector, delights in challenging Rolls-Royce’s designers and craftspeople to develop truly unique materials, hues and features. The results serve as some of the boldest and most emblematic examples of Bespoke design ever executed at the marque’s centre of excellence in Goodwood. When Mr Fux came to commission his first Dawn for handover at Pebble Beach, he came to develop his very own colour, dubbed ‘Fux Blue’, which will remain reserved for his exclusive use. The stunning exterior shade is complemented by a blue hood in the same tone, in contrast to the Arctic White rear deck and fittings to the interior. In order to ensure perfect sartorial harmony, the marque’s designers clothed the entire interior including steering wheel, instrument panel cowling and interior veneers in Artic White, creating a truly unique and contemporary aesthetic.

‘Dusk until Dawn’ at Porto Cervo

To mark the beginning of the 2016 summer season with the opening of the Rolls-Royce Summer Studio in Porto Cervo the Bespoke team created unique examples of both Wraith and Dawn. The dusk-inspired Wraith is finished in subtle two-tone Premiere and Jubilee Silver paintwork. When the doors are opened an exquisitely vibrant interior is revealed. A combination of Tailored Purple, Purple Silk and Powder Blue leather draws on visual highlights in the sky above Sardinia. The exotic fringes of Porto Cervo’s nightlife are reflected in the use of luxurious and supple Ostrich leather on the centre consoles and door panniers.

Porto Cervo’s location on the Costa Smeralda provided natural colour cues and visual inspiration for the accompanying Dawn. The exterior is painted in lustrous Emerald Green, with matching interior accents complementing the Seashell leather. Open-pore teak panelling throughout the cabin is enhanced by a Bespoke piece of jewellery that adorns the display lid, with Emerald stones and Mother of Pearl set into white gold to form a jewelled graphic reminiscent of a compass rose.

Sounding the perfect note – Rolls-Royce Inspired by the Greats

Again, it is deeply held passions that serve as the inspiration for a stunning collection of motor cars. Commissioned by a Rolls-Royce dealer in the Middle East, this collection celebrates the work of the great classical composers.

This Ghost features a monochromatic exterior design, embellished with a striking coachline that incorporates the clef-like motif. The motif is echoed throughout the cabin, adorned on the clock, laid into the wood and stitched into the headrests. A particularly elegant Bespoke feature is the Barrel Oak veneer dashboard panel, with a ‘folded back’ design that reveals Dark Ebony woodwork beneath, inscribed using the art of marquetry with the exact musical notation from the patrons favourite piece.

A nautical Dawn for Pebble Beach

For many of the marque’s patrons, a Bespoke Rolls-Royce serves to celebrate a long-held passion.Taking inspiration from the designs of high-performance yachts, a nautical-themed Dawn was commissioned by a Floridian and delivered to her at the 2016 Pebble Beach Concours d’Elegance. Finished in a two-tone combination of Arctic White with a Midnight Sapphire windscreen surround and bonnet, the sleek convertible mimics the high-contrast appearance of a superyacht, complemented by a teak rear deck and ‘Canadel’ teak interior panels. The Bespoke cabin clock is inspired by its patron’s favourite watch. As well as referencing the Pebble Beach handover, the treadplate completes the nautical theme, showing the four international maritime signal flags that spell out ‘Dawn’.