South African-‘born’ Rovos Rail’s Pride of Africa is included in the list of great luxury trains of the world. We take a look see… 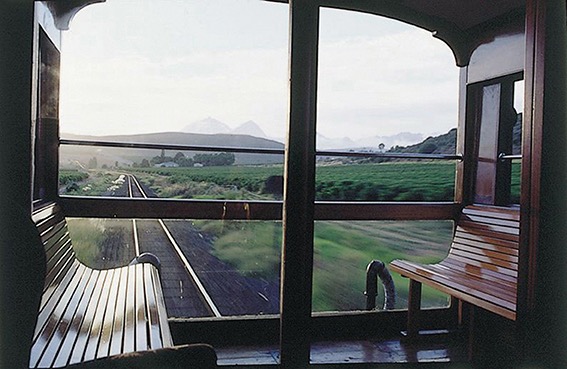 There is something irresistible about the neat allocation of space in a luxury-train compartment. You are obliged to stow away your gear with yacht-like precision in ingeniously hidden cubbyholes because, sensibly, the queen-size bed dominates the space. Remember playing ‘wilderness’ as a child, when tents in the backyard, torches, night sounds and giggly conversations turned a sleepover into an adventure? Two nights on this train is a grown-up and luxurious version of it. Wood-panelled walls take the place of canvas, and the romantic glow of bedside lighting is the stand-in for flashlights. The night sounds are the train’s own murmurs.

Blissfully, the use of electronic equipment is frowned upon in public spaces, so passengers must detox digitally and get to know each other. We’ve dressed for dinner and slip into the easy familiarity of long-standing friends. Germans, Chinese, Norwegians, Dutch, South Africans and French – all on a meandering trip from Pretoria to Durban via South African War battlefields, a game reserve and a Midlands countryside so green it could be a stand-in for a Tolkien shire.

Rovos Rail is a neat adventure in every way – stimulating, relaxing and quietly luxurious.

The now-famous rail line, started formally as a business by Rohan Vos in 1989, offers trips from 48 hours to 28 days for up to 72 passengers, with the 6 000km Cape Town to Dar Es Salaam trip being the Pride of Africa gem. It’s been a hell of a ride, and Vos would be the first to admit it. In 1986, the restoration of an old locomotive, which he’d named Bianca after one of his daughters, was the beginning of what Vos had thought would be a family affair – an imaginative, if not challenging, way to see Africa by rail and indulge his hobby in the process. That is until South African Railways (SAR) presented him with the tariff for hauling the train. Vos’s romantic notion of railing about Africa would have been a fast track to bankruptcy, but when SAR granted him permission to sell tickets, the idea that perhaps the hobby and family holiday lark might just make good business sense, if a few people could pay their way, took root. The history behind the growing collection of carriages, dining cars and, most importantly, steam locomotives, really deserves its own expansive story but, in short, most of the splendid heavyweight dames that had chuffed and clattered their way across Africa trailing smudges of grey smoke in their slipstream were ultimately downgraded to the job of shunting and then withdrawn from service, destined for scrap. They deserved better. Vos’s acquisition of rolling stock sourced from all over South Africa turned into a business and a passion that would be spoken about reverently in the same breath as the Golden Eagle Trans-Siberian Express and the Venice Simplon-Orient-Express.

Today, the ‘steel magnolias’ Vos has restored hang out in Pretoria’s Capital Park – Rovos Rail’s own version of the Best Exotic Marigold Hotel for trains. Steamtrain travel is sadly a thing of the past, though, and while you leave the station hauled by an Anthea or a Marjorie, it is a short, symbolic journey, and soon a diesel or electric locomotive takes over, doing a less stylish but more workmanlike job of hauling the up to 20 carriages to their destinations.

For our Pretoria to Durban trip, we boarded King Zog (1954), a loco that had been used for hard haulage and had ended her life in Kimberley. Temporarily as it turned out. She was also a Vos adoption and destined for Pygmalion transformation. Service starts early on in the journey with your own private hostess unravelling the mysteries of efficient storage, how to shower in a swaying cubicle without banging your humerus, shutter etiquette on station stopovers, and helpful hints on how one might manoeuvre around a husband who, at 1,93 metres, was better stashed most times on the bed if you wanted efficient compartment choreography. He was uncomplaining. Still, the whole idea is to sleep here, or read (or furtively email or SMS if you need to), and then spend most of your time in the observation lounge or dining cars.

Serving three-course dinners on the move is tricky. Considering that kitchen staff need to move like animated Egyptian friezes to ensure efficient cooking and plating in confined spaces, it’s a miracle that we all get perfect servings. Not many top-class chefs have to delicately garnish their dishes while practising such deliberate hand-eye coordination. Breakfast is a lavish medley of fruit, cereals, fresh juice, freshly brewed coffee and eggs any way you like them, and for continental tastes, cheese and a selection of charcuterie. One can drink wine at lunch and dinner because, for once, someone else is driving. The wine list is superb, and no foreign guest could have completed their trip without a new appreciation of South African vintages, with Waterford Estate wines a top marker.

Between eating, reading, talking and sharing the photograph of the day are the famous Rovos Rail excursions. On this Pretoria-to-Durban run, two stand out: Ardmore Ceramic Art, and Majuba Hill (30km before Newcastle), where Raymond Heron recounts the battle of all battles during the first South African War.

At Ardmore we enter Fée Halsted’s ceramic jungle – it’s a 3-D plunge into her artists’ version of Fauvism. The ceramic art studio, started in the foothills of the Drakensberg (a few years before Vos launched Rovos Rail) by this remarkable woman, has produced works that have found their way around the world and which have recently broken international auction records.

Then we relive the final desperate moments of The Battle of Spioenkop (1900), retold with immense detail and insight by Heron. We look over the battlegrounds from high above and listen with rapt attention to the bravery and foolhardiness of both sides of the war. We hear of a young Winston Churchill on the frontlines and, by bizarre coincidence, he’s there at exactly the same time as Mohandas Gandhi is serving as a medical volunteer. We follow the tales of stealthy attacks at dawn, heartbreaking miscommunication and poor calculation that led so many men to die and, in those terrible times, over 500 000 war horses to perish in the battle for territory and power. It seems impossible now. The green hills undulate to a far horizon, the Tugela River snakes lazily on its course, and the sky is a crystalline blue – there’s nothing of the smell of gunpowder.

It’s the train that has brought us here, and while it is luxury on wheels, off-train experiences are enriching far beyond personal comfort and pleasure. One travels to learn and alter perspectives, attitudes, perhaps even the way you have always thought about things. One arrives as a guest and leaves as a traveller.