Nihiwatu, an ultra-luxury resort on the south coast of Sumba is an hour’s flight from Bali. Expect a wild coastline and the surf of dreams, as well as a better life for those who live there. 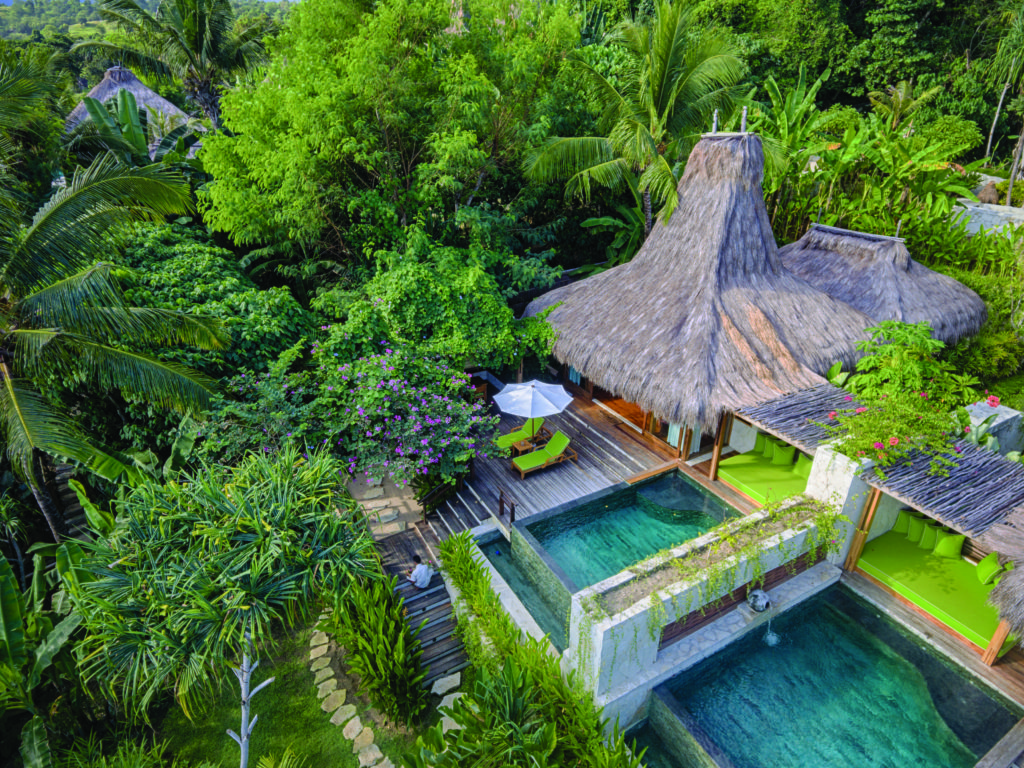 It’s two hours after sunrise and we’re walking down to the sea across grassy knolls broken by clumps of banana trees, palm trees and cashews. Barefoot boys herd water buffaloes chewing languidly on their cud to a paddy where they’ll be driven around and around the terraced land, churning the earth with their hooves. ‘It is the best way to plough,’ explains our guide, Tiger. ‘Some farmers will use a machine, but then the rice doesn’t grow as well.

Rice is precious here on Sumba, one of Indonesia’s southernmost islands. Unlike nearby Bali, where farmers grow three rice crops every year, Sumba can sustain only one. ‘Our island is actually very dry,’ says Tiger. ‘That’s hard to believe now, during the rainy season.’

Two hours ago we were wrapped in pure cotton sheets in a four-poster bed in the hotel that last year Travel + Leisure magazine readers voted the ‘number one hotel in the world’.

Set on a 2,5km stretch of beach, Nihiwatu is the poster child for a tropical island escape. The 28 villas, all hidden by gardens, are fringed with thatch roofs. Voluptuous gold-coloured bath tubs set on their verandas allow ocean views, and all over the resort there are vine-shaded havens with sofas, sun loungers or hammocks. Slothfulness is not the only sinful temptation – there’s even a small chocolate factory here. And then there’s The Wave, likely the most exclusive in the world. Outside rainy season, when the crisp left-hander barrels over the reef, you’ll pay US$120 a day for the privilege of being one of 10 people to surf the legendary Occy’s Left.

As we continue through the paddies, Tiger tells us about traditional life on Sumba. He speaks about pasola, Sumba’s ritual horseback battle designed to spill blood on the ground to ensure successful rice crops; he says priests know peoples’ futures by reading the livers of chickens, and that animals are slaughtered at every funeral. It’s an expensive tradition that’s difficult – but important – to maintain on one of Indonesia’s poorest islands.

We pass a woman carrying a container of water. She greets us warmly, as do all the people we meet, and we feel particularly welcome here. ‘Women and children used to spend so much time carrying water to their homes,’ says Tiger. Traditionally, Sumbanese villages of tall-roofed stilted houses were built on top of hills – excellent for defence, not so good for access to water. ‘But now life is easier because the Sumba Foundation has built wells close to many of our villages; the children now have more time for school and the women can do things like weaving and cooking.’

The Sumba Foundation is Nihiwatu’s gift to the island, an initiative conceived by the resort’s founding owners, Petra and Claude Graves. If you ever wanted proof that what you put into something is what you get out, Nihiwatu is it. A small surf camp has become a major innovator and the biggest employer on the island, a place that has managed to uplift the community in this region. When the couple first landed on Sumba in 1988, there was virtually no infrastructure. During those early years Sumba crept under their skin, and the couple experienced life as the locals do – and that meant dealing with harsh realities. Water was scarce; malaria was rampant; access to good healthcare was nonexistent.

From the outset Claude and Petra put as much into the island as they could and in 2001 the Sumba Foundation was established, allowing them to formalise their aid work. When the hotel’s current owners, Chris Burch and South African-born James McBride, invested in Nihiwatu in 2012 and took it to new levels of luxury, the foundation continued to flourish. Funded by a percentage of profits from the resort and donations from guests, it has provided and maintains wells that supply water to almost 20 000 people; it has built and supports six schools and five clinics (including two prenatal-care facilities), established a nutrition programme that serves 3 000 meals a week (and plans to increase that to 7 500), launched a nursing scholarship programme, and reduced malaria on the island by 85 percent.

Nihiwatu has a deep connection to the island’s communities and their culture. It is not simply a salary-payer but a nurturer, a preserver and an enabler that, by lessening the consequences of poverty, is actively changing thousands of lives.