Born on the track, built for the road: the all-new Audi R8 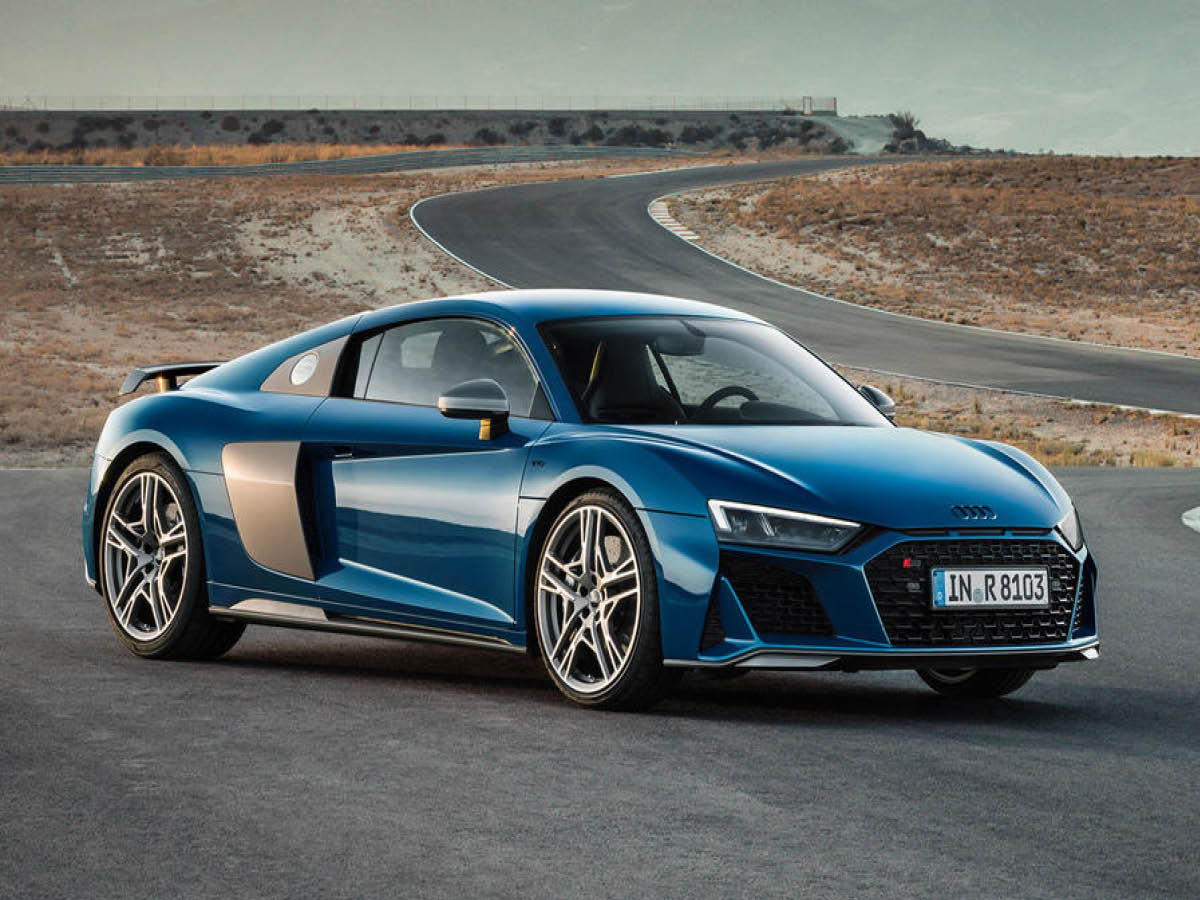 The all new Audi R8 is the most powerful and fastest production Audi ever built. Designed for maximum dynamism in all of its technical aspects – from its Audi Space Frame (ASF) to its aerodynamics and newly developed quattro all-wheel drive. The naturally-aspirated V10 mid-engine guarantees tremendous performance, especially in the V10 Plus version sporting 449 kW.

The Audi R8 success story began with the market launch of the first generation in 2007. Since then, the company has sold just under 27,000 units of the model worldwide. Launched in South Africa also in 2007, the Audi R8 found 345 homes in the local market throughout its lifecycle.

A powerful, high-revving mid-engine, a quattro drive system with freely variable torque distribution, systematic lightweight design with an ASF made of carbon-fibre-reinforced polymer (CFRP) and aluminium, and a dynamic chassis all make the R8 the sporty vanguard of Audi. The close cooperation between race car engineers, motorsport specialists and developers has led to significant performance gains – in both the road-version sports car and the R8 LMS race car that was designed simultaneously.

“The new Audi R8 V10 plus is the most powerful and fastest production Audi ever,” says Dr. Stefan Knirsch, Board Member for Technical Development. “Motorsport has always been a solid component of our brand character. With the new R8, our engineers are transferring their entire accumulated racing expertise from the race track to the road. It also lets us reinforce our core brand values of dynamism, design and quality.”

The new Audi R8 is available with two engine derivatives – with 397 kW for the R8 V10 and 449 kW  for the R8 V10 plus. Their maximum engine torque – 540 Nm and 560 Nm respectively – is available at 6,500 rpm for both engines. Compared to the previous model, power has increased considerably, and the responsiveness of the high-revving (up to 8,700 rpm), naturally aspirated 5.2-litre engine is now even more spontaneous. Like a race car engine, the V10 engine has dry sump lubrication. Its characteristic sound is now even fuller, with an optional sports exhaust system also available for order.

Efficiency has vastly improved over the previous model by up to 13 percent (33 g/km CO2). The new V10 engine was given effective efficiency technologies such as the COD (cylinder on demand) system, which shuts off one row of cylinders under low load conditions. Another is dual injection, which injects the fuel into the combustion chambers and induction manifold according to demand. When the driver takes their foot off the accelerator pedal at speeds over 55 km/h, the new R8 goes into a coasting mode. When the car comes to a stop, a start-stop system deactivates the V10 engine.

Positioned behind the V10 is a seven-speed S tronic that executes lightning-fast gear shifts by electrical control (shift-by-wire). The dual-clutch transmission directs forces to a newly designed quattro drive system with an electrohydraulically activated multi-plate clutch at the front axle. It has active water cooling for maximum performance. The clutch distributes drive torque fully variably according to the driving situation – up to 100 percent can be directed to either the front or rear wheels.

Management of the clutch is integrated in the Audi drive select dynamic driving system, and it gives the driver a choice between the basic modes comfort, auto, dynamic and individual. On the R8 V10 plus (and as an option for the V10), the performance mode comes with three additional modes: dry, wet and snow. They adapt key handling parameters to the friction coefficient of the road surface. A mechanical rear differential lock is standard; its locking values were newly tuned to work together with the actively controlled quattro drive.

The motorsport DNA of the new Audi R8 also expresses itself in the chassis area with its aluminium double wishbone suspensions. On the V10 plus, the tuning is very sporty, and electronically controlled shock absorbers (Audi magnetic ride) are available as an option in both engine versions. The new electromechanical power steering system gives drivers finely differentiated road feedback. As an alternative, Audi can install dynamic steering, which adapts its steering gear ratio to the vehicle’s driving speed.

In both engine versions, the new Audi R8 has standard 19-inch wheels, and 20-inch wheels with size 245/30 tires in front and 305/30 at the rear are available as an option. The powerful brakes decelerate the car effectively; in the top model, the disks are made of carbon-fiber ceramic (optional on the R8 V10).

In the top model, the R8 V10 plus, the unladen weight (without driver) is only 1,555 kg, and the dry weight is a low 1,454 kg. Playing a decisive role in this systematic lightweight design concept is the Audi Space Frame (ASF), which weighs just 200 kg thanks to a new type of multimaterial construction. It comprises 79 percent aluminium and 13 percent CFRP.

The aluminium parts create a framework that integrates large CFRP components – the centre tunnel, rear wall and B-pillars. On the R8 V10 plus, add-on parts such as the sideblades and diffuser are made of CRFP, which complements the lightweight alloy exterior skin. Compared to the previous model, the multimaterial ASF has 40 percent greater torsional rigidity, and its acoustics and crashworthiness also get top grades.

As in a race car, the aerodynamic concept of the new Audi R8 is designed primarily for driving stability. Its central element is a long and wide diffuser in the underbody. On the R8 V10 plus, a total of 140 kg of downforce is generated at top speed: 40 kg at the front axle and 100 kg at the rear axle.

The new Audi R8 is 4.42 metres long and 1.94 metres wide. Its proportions – with its cabin placed far forward, a long back and relatively short wheelbase – make the technology concept of the mid-engine sports car clearly recognizable at first glance. Characteristic design features of the previous model now take on a sharpened expression. The sideblades, for instance, are now interrupted by the continuous shoulder line that gives the sides a look of tension and excitement.

Large air inlets with vertical fins and LED headlights flank the wide, low-profile Singleframe grille that has a strong sculpted appearance. As an option, Audi can deliver LED headlights with laser spots that double the range of the high-beam headlights This option also includes dynamic turn signals in front; they are standard in the LED tail lights. The look at the rear is shaped by the diffuser, the ventilation screen of the engine compartment and – on the V10 plus – a CFRP fixed wing.

The eleven exterior colours that are offered may be combined with any of the six versions of sideblades. The R8 V10 plus adds CFRP sideblades with a gloss finish as standard equipment. The Audi Exclusive program also allows customers to order any paint colour blended according to their wishes. Buyers can also choose any colour for the sideblades.

In the interior too, the lightweight design concept of the new Audi R8 is expressed in taut lines. The defining element is the arch-shaped “monoposto” that wraps around the cockpit. The instrument panel appears to float weightlessly, and turbine-shaped controls for the automatic air conditioner are arranged along its lower edge. Behind the seats is a cargo space with 226 litres of capacity. It supplements the 112 litre luggage compartment at the front of the car.

The low-mounted sport seats with integrated head restraints are entirely new. In the plus model, there are lightweight bucket seats (optional on the V10). Customers can choose between Alcantara and fine Nappa leather for the upholstery in a number of different colour combinations. In addition, two leather packages are offered as well as a new diamond quilted pattern and decorative trims in matt CFRP. Individualists can have nearly any other special wishes fulfilled in the Audi Exclusive program.

All important functions can be controlled without drivers taking their hands off the steering wheel or looking away from the road. The R8 sport leather steering wheel with multifunction plus, which is standard on the R8 V10, integrates two satellite buttons for starting and stopping the engine and for Audi drive select. The R8 performance leather steering wheel with four control satellites (standard on the V10 plus) offers one additional push-button with a turn wheel for the performance mode and another for controlling the exhaust system.

The digital display is also reminiscent of a race car – The Audi virtual cockpit, a TFT monitor with a 12.3-inch screen, presents all information in intricately rendered, high-resolution graphics. The driver can choose between three views. In the performance view, the rev counter is centrally located, and other indicators and gauges are arranged around it – such as for torque, power, oil temperature, tyre temperature, g-forces and lap times on the race track. Drivers can individually configure the gauges around the speedometer and rev counter according to their needs and uses.

The new Audi R8 is being built in a specially constructed production facility known as the “Audi Böllinger Höfe” in Heilbronn, Germany. Body manufacturing and final assembly both feature many new methods and are organized highly flexibly – especially for limited volume series with a handcrafted character. They offer a lot of freedom that enables fulfillment of individual customer requests. As many as 500 highly qualified specialists are employed in the new R8 manufacturing facility, which is operated by quattro GmbH. They build each car with the greatest handcrafting precision in 15 cycles, each around 30 minutes long. Before delivery, each new high-performance sports car must successfully complete a stringent quality acceptance process.