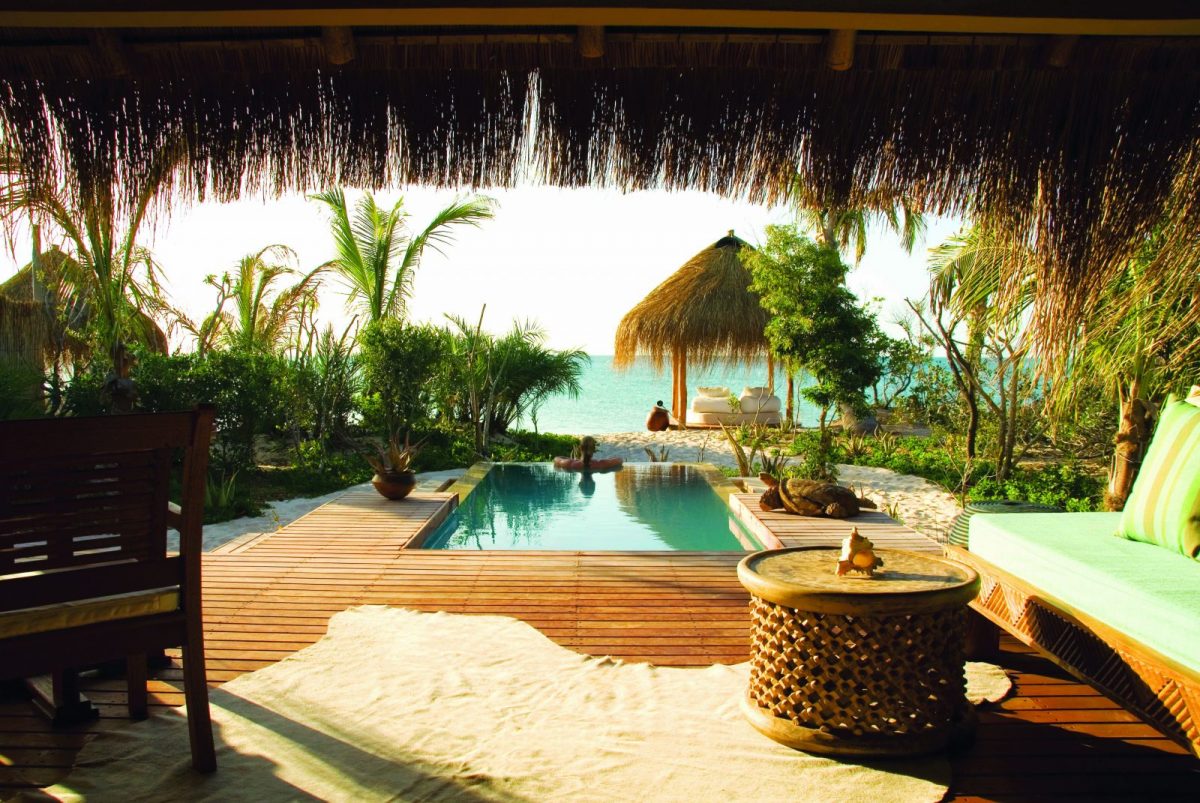 I didn’t find a dugong. But I did find Nemo – and paradise. Paradise is the Azura resort on Benguerra Island, a 10-minute helicopter hop from Vilanculos, following a comfortable 90-minute SA Airlink flight from OR Tambo. It is the second largest of the islands in the Bazaruto Archipelago, which is, in turn, the last remaining Indian Ocean stronghold of the dugong – a beast of surpassing cuteness that is generally believed to have been the inspiration for the world’s mermaid legends. It has the habit of resting its tail on the seabed and sticking its nose above water to breathe – a sight that has long been on my bucket list. But, even though I kept my eyes peeled all the time I was at sea, I didn’t spot one of the approximately 200 dugongs that range through the archipelago. Ah, well – a reason to return.

Azura Benguerra Island ticks all the boxes for a luxury island-resort experience, including crystal-clear 27˚C water to be active in, on, and under.

The ‘under’ option is particularly special. One of the must-do activities

is a trip to Two Mile Reef, arguably the best diving and snorkelling spot off the east coast of Africa, with soft and hard corals of extraordinary variety and beauty. And the fish – ah, what wonders of crazy and inspired design are the fish flitting through the water. Seventy-five percent of the reef fish of the Indian Ocean have been identified at Two Mile, and many of them make Nemo look like a dowdy dowager aunt. Even the names are glamorous – raccoon butterfly fish, yellow-edged lyre tail, bluebanded snapper. An hour underwater presents the diver or snorkeller with an astonishing and dizzying rhapsody of colour and pattern.

There’s plenty more to do if lying on a lounger on the beach or next to your villa’s private pool sipping the cocktail of the day begins to pall. An island drive in the company of a local guide introduces one to the flora and fauna, and the many practical and medicinal uses of the plants on the island. The game fishing is superb – huge marlin at the right time of the year, and smaller fighting fish like skipjack tuna and green-spotted kingfish are plentiful.

One can ride horses on the beach and through the shallows; or ride fat-wheeled bicycles along the hard sand at low tide to Flamingo Bay and beyond; or get really lucky and manoeuvre a stand-up paddle board close to a visiting pod of dolphins.

Azura is a shining example of ecologically sustainable tourism – the involvement with the local community through the Rainbow Fund is committed and extensive. Born-and-bred islanders make up a very large proportion of the 100 people directly employed by the lodge, and purchasing and transport choices are made with islanders’ benefit in mind; the nearly 400 primary-school children on the island are educated in a brick school built and funded by the Rainbow Fund, which also offers scholarships for mainland high school education to deserving students. It’s very obvious that this commitment goes well beyond the lip service to community development offered by many luxury tourist destinations. It’s one of the reasons – perhaps even a core reason – why a visitor to Azura Benguerra Island is welcomed with such genuine warmth and looked after with such open-hearted friendliness.