Great Wall of China – been there, run that!

In 2006 Braam Malherbe achieved a world first – running the entire length of the Great Wall of China. We learn more about what motivates this extreme adventurer. 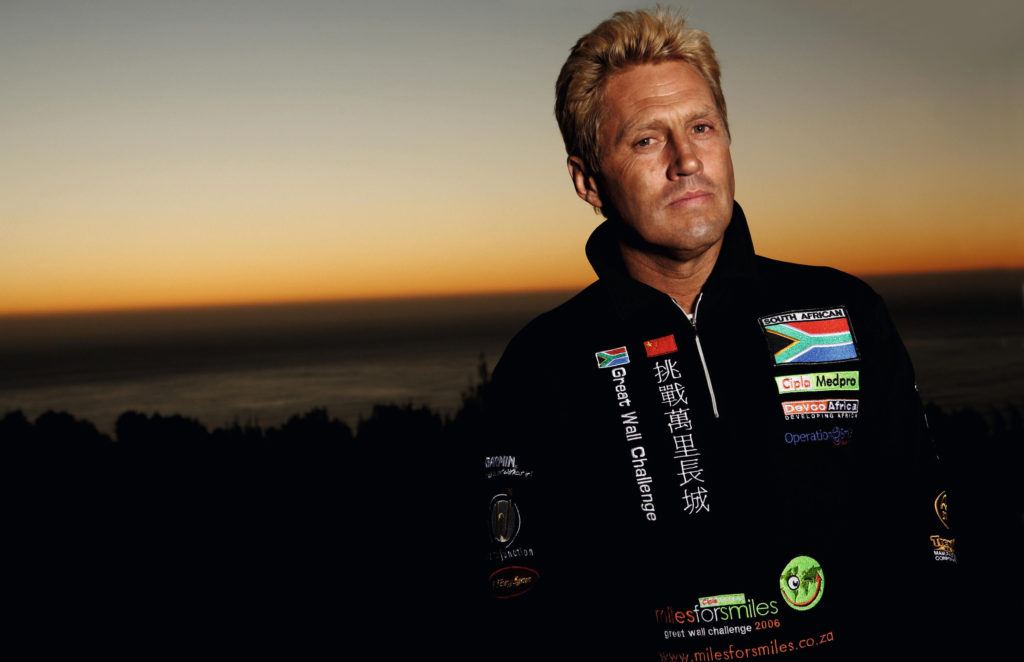 Braam Malherbe ran the length of the Great Wall of China, a distance of 4 218km, in a single attempt. That’s a marathon a day over some of the harshest terrain on earth, for 98 days. It was a world first.

His journey started in the Gobi Desert, crossed the jagged Taihang Shan range and ended at the Bohai Sea. He endured blood-boiling heat, sandstorms, bone-chilling mountain nights and witnessed large-scale environmental devastation. He called on reserves far deeper − physically and emotionally − than he even realised he had.

‘I will never forget the hell of being caught in a dust storm in the Gobi. This hot, howling wind that came up within minutes, whipped up orange powder like something out of The Lord of the Rings. It engulfed me as I ran for my life,’ shares Malherbe.

At a cost of 100kcal (roughly 420kJ) a kilometre, Malherbe had to expend nearly three times as much energy as that used by cyclists in the Tour de France. He was told by internationally acclaimed sports scientist Professor Tim Noakes that running 42km a day, six days a week on uneven surfaces for more than 17 weeks was impossible. However, Malherbe reasoned that if something hadn’t been done before, it didn’t mean that it couldn’t be completed successfully. His belief is that if you have a purpose or cause beyond ego, you can achieve anything.

‘I have never done an expedition that was not purpose-driven. I don’t just want to be successful, I want to be significant,’ Malherbe explains. ‘The Great Wall of China challenge was to raise money for Operation Smile, which provides life-changing surgery for children born with cleft lip and palate disfigurements. I can emphatically say that I would not have finished the run if it was not for those kids – we helped each other,’ he emphasises.

As a 17-year-old, yet to run more than 10km, Malherbe took on a 532km challenge from Plettenberg Bay to Cape Town in 11 days. His goal: to raise money to save the Langebaan Lagoon ecosystem from potential destruction. This made him realise the power of an ordinary person. ‘The difference between ordinary and extraordinary is just the word “extra”,’ says Malherbe.

The themes of his life are clear – the capacity to perform physical feats that others see as impossible and the passion to protect our planet.

Two years after his Great Wall run and after undergoing major knee surgery, Malherbe notched up another world first. He ran the 3 278km coastline of South Africa – from Namibia to Mozambique. With philanthropy an equal driver to his desire to save our planet, he again linked the coastal challenge to Operation Smile, raising in excess of R2,5 million.

In 2012, Malherbe and Peter van Kets, who had rowed the Atlantic unassisted for 5 200km over 76 days, represented South Africa in the 24-day Scott-Amundsen Centenary Race to the South Pole. It’s been described as the most extreme race on the planet − competing on frozen terrain so deprived of life you won’t even find bacteria in the ice. Putting skis on for the first time eight weeks before the start, the duo competed against six other teams that had been training for more than two years. Malherbe and Van Kets achieved a third spot finish.

Malherbe chose another cause to drive him; this time it was climate change. ‘Without exception, it is the most critical problem threatening our survival on Earth. We are in a race against time, which is why I used the race to highlight the issues we face and what we can all do to mitigate climate change,’ he says.

The Great Run by Braam Malherbe is available via braammalherbe.com, Amazon or takealot.com.

Malherbe and Van Kets are planning to row the Cape to Rio Yacht Race in 2017. Their ‘zero-emissions’ mission, if successful, will be a world first and a massive South African sporting achievement.