Straight to the point with Montblanc

Debbie Hathway reflects on an indelible experience near Athens to celebrate a literary icon and launch some special new writing instruments.

If you’re a journalist required to cross continents to attend a whirlwind launch, one of the perks of the job is that your host makes it as painless as possible. Cape Town – Dubai – Athens – Costa Navarino in 22 hours virtually flew by (excuse the pun).

I joined colleagues from Turkey, Israel, and India for the final leg of the journey from Eleftherios Venizelos Airport to the Romanos Resort (listed by Condé Nast Traveller as among the best family hotels in the world for 2018). We were chauffeured along the motorway and into the Kalamata countryside along stretches of narrow roads that wound past olive groves and small villages, teasing us with glimpses of the ocean as we drew nearer to Costa Navarino in the Peloponnese.

After freshening up while the sun sank slowly into the Ionian Sea we completed our ‘odyssey’ at the palatial Royal Villa Koroni where our Montblanc hosts were waiting to welcome special guests from around the world to the launch of their 27th Writers Edition, Homage to Homer. And the penny dropped – finally. The Odyssey. Homer’s epic work, which, together with his poem The Iliad, is credited for providing the foundation for Western literature, was not simply the inspiration for our epic journey but the creative genius behind the new writing instruments that bear his name. That afternoon we had travelled via Mycenae to Messinia, both of which featured in Homer’s writing, the latter in the way of the first written account of hospitality in The Odyssey. 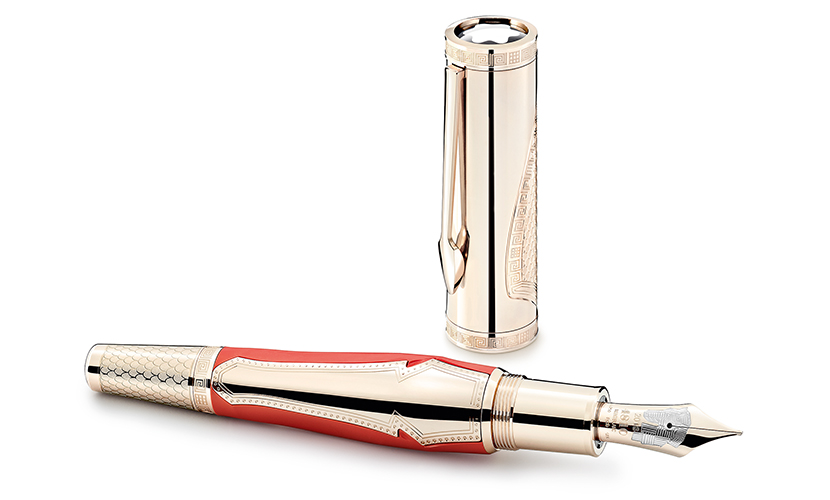 Such is the skill of the Montblanc artisans that I couldn’t suppress my excitement when I saw the Homage to Homer Limited Edition 1581 for the first time. (The collectors present had already given it resounding thumbs up!) Franck Juhel, Montblanc President Middle East, India, and Africa, smiles proudly. That’ll do. ‘Your reaction means that our designers, our craftsmen, our historian reached their goal,’ he says. ‘The whole objective with each writing instrument we produce – especially the limited editions – is putting all this history and know-how together to bring the story to life in your hand.’

Montblanc launches a new Writers Edition annually. This 2018’s tribute to Homer offers two writing instrument designs, both limited in production but only one that is numbered to 1581 pieces (the year when The Odyssey was first translated from French to English. It was years later that a direct translation was made from Greek to English.)

The Odyssey, Homer’s account of the 10-year journey by Odysseus to return home from the Trojan War, has inspired the shape of the writing instrument as well as the finer details. You’ll notice the reference to the wooden Trojan horse but look for the champagne gold-coated clip that resembles the spear of Achilles and the fine engraving of his helmet on the handcrafted nib. Further engravings also reference the six-footed structure of the hexameter that the ancient bards used to help them remember long texts.

Crowned with the Montblanc emblem, the matte black precious resin Writers Edition Homage to Homer is available as a fountain pen, and ballpoint pen, as well as a mechanical pen (only in a set). The Homage to Homer Limited Edition 1581 meanwhile is crafted from precious coral resin with a cap featuring a gold-coated inlay inspired by the armour of Achilles, the central figure of Homer’s The Illiad.

What makes this edition so special? ‘Usually, our designs are very symmetrical. It’s the first time we’re shaping the body in precious resin. This has been very difficult to achieve,’ says Juhel. ‘We’ve also responded to the call by collectors for a 149 nib, the largest in the Montblanc collection.’

A South African collector with approximately 400 writing instruments in his collection (not all by Montblanc) is ‘very happy’ that (they) finally listened to the collectors’ plea for another 149 nibs, adding that the last one produced was in 1996. Asked whether he’s impressed first by the design or the story behind a new release, he says, ‘If you know the story behind the design, it’s going to trigger something. It’s very easy to overdo it, to be too elaborate and gaudy… you’ve got to be able to capture the design with elegant simplicity.’

Montblanc is all about storytelling but this time I’ve got a few of my own to share. ‘We do not remember days, we remember moments.’ I haven’t forgotten the event refrain and neither has this collector who refers to it as an ‘indelible experience’. As if the helicopter flip over the ocean on the return trip to the airport wasn’t enough of a final flourish, suffice to say that taking a shower at 12 496 metres in the Emirates Airbus A380-800 First Class cabin is something I’m not going to forget in a hurry either.