To mark 100 years since it first opened its doors in 1921, Winchester Mansions has undergone a colossal makeover and will re-emerge this spring newly invigorated as The Winchester. 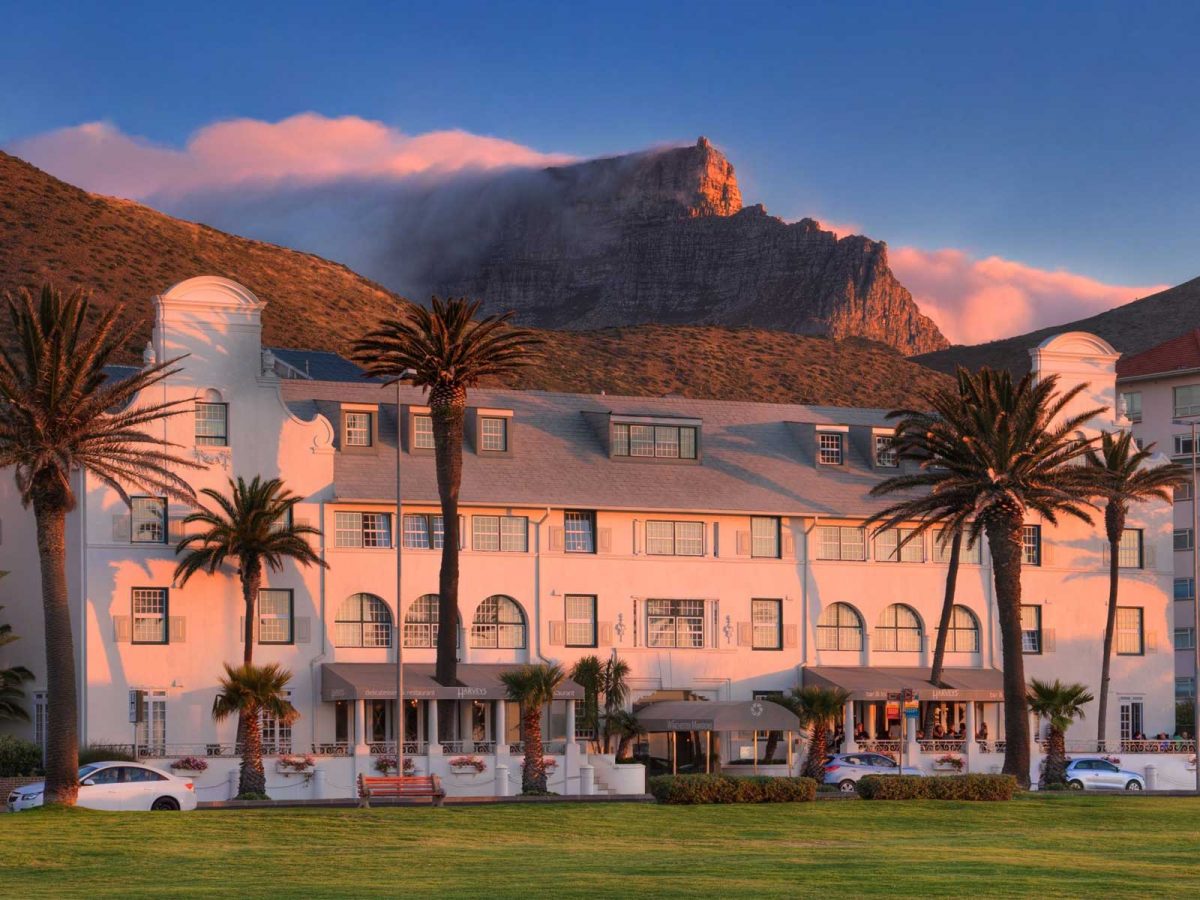 Ask a Capetonian for their pick of the city’s gracious grande-dame hotels, and chances are that Winchester Mansions in Sea Point is near the top of the list. During the past century this graceful hotel has looked out over the city’s iconic seafront promenade, across the Atlantic Ocean to Robben Island, framed by the timeless backdrop of Lion’s Head and Table Mountain.

But hotels aren’t timeless. While their charms may grow, even the best of them age, however gracefully. And the brave new world in which we find ourselves is nothing if not a time for renewal. Which is why a newly invigorated hotel has thrown open its doors – subtly rebranded as The Winchester and reimagined for a 21st- century traveller thanks to a R90-million revamp.

The Winchester was first built in 1921, originally as a residential apartment block. In fact, the central courtyard, which has in recent years become famous for hosting the hotel’s jazz brunch- es, was originally the parking lot. Much needed to change, and the building’s centenary called for a major overhaul of plumbing and essential infrastructure.

So, while much of the refurbishment is hidden from view, the comprehensive modernisation was key to transforming the property.
‘The redesign started from a very functional point of view, but that gave us the opportunity to reinvent and elevate the guest experience,’ explains Mardré Meyer, creative director at SOURCE Interior Architecture, the imaginative force behind the refurbishment and rebranding. 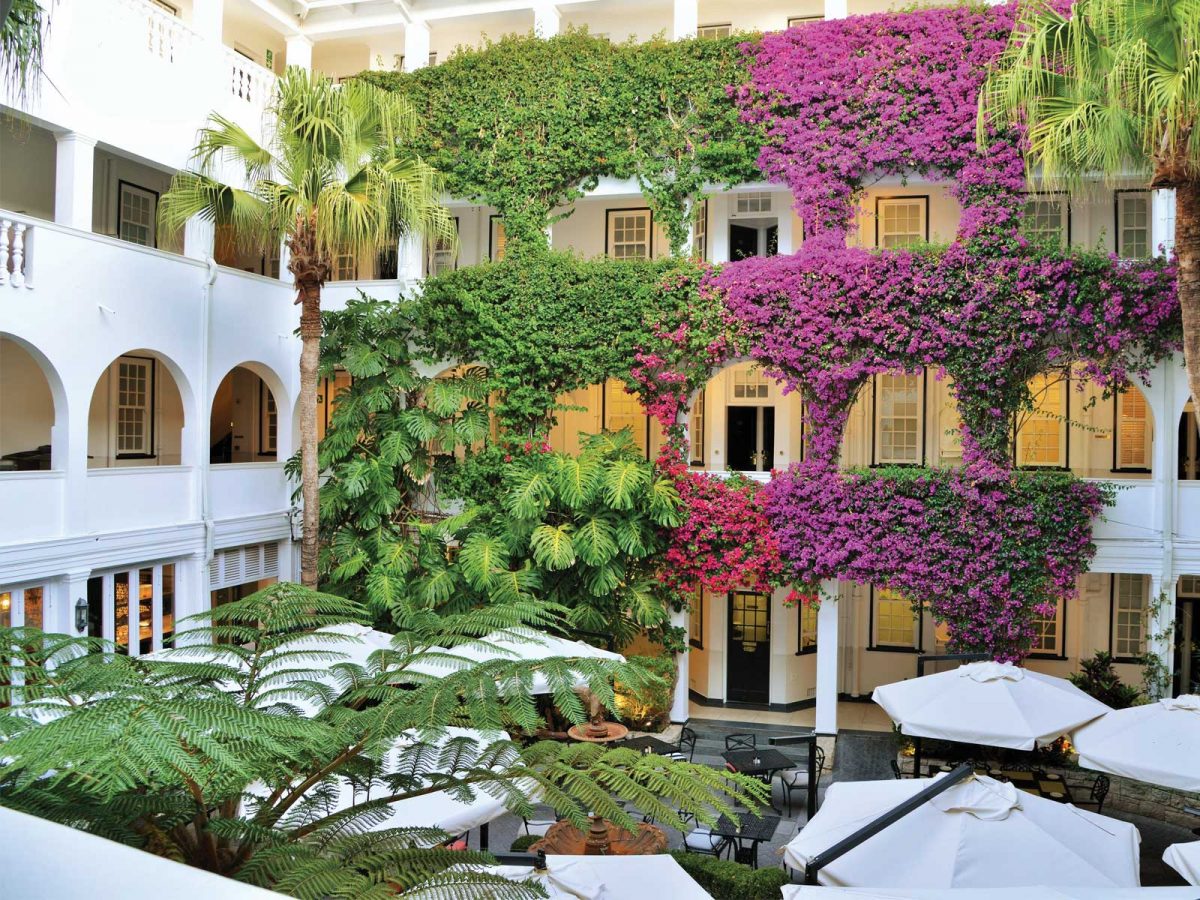 In conceptualising how to reinvigorate the property, ‘our first principle was to reference, not simply restore’, adds Meyer. ‘We wanted to respect the architecture, and deliver on the level of expectation set by architecture, but this is not a museum. It’s a contemporary building for contemporary travellers.’

That is perhaps most evident in the glorious new bathrooms that offer a subtle celebration of both vintage glamour and contemporary flair. Taps and fittings are finished in an alluring champagne lustre that alludes to, without mimicking, classical brass touches. Baths are freestanding, yet not roll-top, and throughout the property subtle aesthetic cues hint at the golden age of travel, thoroughly updated for the present.

While many elements of the revamp are under wraps until reopening, the room décor and the public spaces are set to evoke a similar sentiment, with a bold black-and-white colour scheme married with playful wallpapers celebrating the hotel’s rich history.

‘It’s about blending the old and the new, without losing a sense of nostalgia,’ adds Neil Markovitz, CEO of Newmark Hotels, Reserves, Lodges and Residences, which will operate the refurbished hotel.

‘It’s just such an iconic property in so many ways,’ adds Markovitz. ‘The historical significance of the hotel is enormous, and there’s incredible reputational value that it has enjoyed throughout the years. There aren’t many properties around with that sort of nostalgia, and the experience is all about genuine hospitality, which is what we aspire to. There’s a real focus on personalised service.’

While the portfolio is wide-rang- ing, individual character and charm is key, says Markovitz. ‘We have worked hard not to become a brand that dominates the individual character of each hotel. Our properties stand proud; they are part of this collection, but there’s a component of independence to each.’

Those unique elements look set to continue in the reimagined property, with perennial favourites, including the jazz brunches and cocktail terrace, dovetailing with a memorable new food and beverage offering.

‘We don’t just create generic dining-room experiences,’ says Markovitz. ‘We want an offering that really fits within the property, that can complement the hotel, but equally stand on its own.’

Yet given the turmoil in the world of travel over the past 18 months, one has to wonder why any hotelier would consider adding yet another property to their portfolio at such a time?

With his decades of experience in the industry, Markovitz remains optimistic.

‘I’m bullish, because I believe we have realistic targets about what we see going forward. We’ve really engaged with the domestic market, and we see it remaining a large percentage of our customer base,’ adds Markovitz. ‘Having just returned from Portugal, where we operate 14 hotels, we are starting to see what a return looks like. Countries are starting to open up, and a number of hotel operators are achieving pre-pandemic numbers.’

After so many months of gloom, that is reason enough to celebrate. And there are few better places to raise a glass of bubbly this festive season than on the revamped terrace of The Winchester.