Sotheby's unveils the full contents of The Collection of Edward Albee, which we are honored to offer in a dedicated auction in New York on 26 September 2017.

Acquired across decades, the 100+ works on offer surrounded Albee in the Tribeca loft he lived in for over 30 years. Together, they demonstrate the artist’s great passion for collecting and provide unique insight into his creative vision. The highly-personal group spans the 20th century with a focus on – in Albee’s words – “art that is about art”, featuring American, Modern and Contemporary art alongside a selection of African & Oceanic sculpture (Edward Albee, A Playwright’s Adventure in the Visual Arts).*

The September auction will be preceded by a public exhibition in Sotheby’s York Avenue galleries, opening 20 September. Here visitors will discover standout pieces by Jean Arp, Milton Avery, Marc Chagall, Lee Krasner and John McLaughlin, sparking the same visual and conceptual dialogues between works that Albee encouraged in his everyday living with the collection. With a significant selection of works estimated under $5,000, this auction marks a singular opportunity for both new and established collectors drawn to his considerable legacy.

The full proceeds of the sale will benefit The Edward F. Albee Foundation, which provides residencies for writers and visual artists in Montauk, Long Island.

“As I think about my tastes in music and the visual arts I suspect it all is a piece with my playwriting – that how I ‘see’ and how I ‘hear’ determines how I think, and that determines how I write, and that, of course, determines who I am.”
— Edward Albee, A Playwright’s Adventure in the Visual Arts

The name Edward Albee immediately conjures associations with theater and American literature. As a three-time Tony Award winner, three-time recipient of the Pulitzer Award for Drama, and one of the cultural tastemakers of the 20th and 21st centuries, his iconic plays including Who’s Afraid of Virginia Woolf?, Three Tall Women, and The Goat, or Who is Sylvia? transformed the landscape of post-war theater in the United States and beyond.

And yet, Albee’s influence and keen observation of modern life extended beyond the confines of theater – for those who knew him well, and those who had the pleasure of his mentorship, Albee also advanced the visual arts. Through his commentary and support of young artists – who he described as individuals “who stand at the edge of the cliff, look over, assume they can fly, jump, and very often, discover that they are right” – he left a significant legacy (Edward Albee, A Playwright’s Adventure in the Arts). A number of the artists he championed, officially at The Edward F. Albee Foundation in Montauk and unofficially in his collecting, are represented in his personal collection. 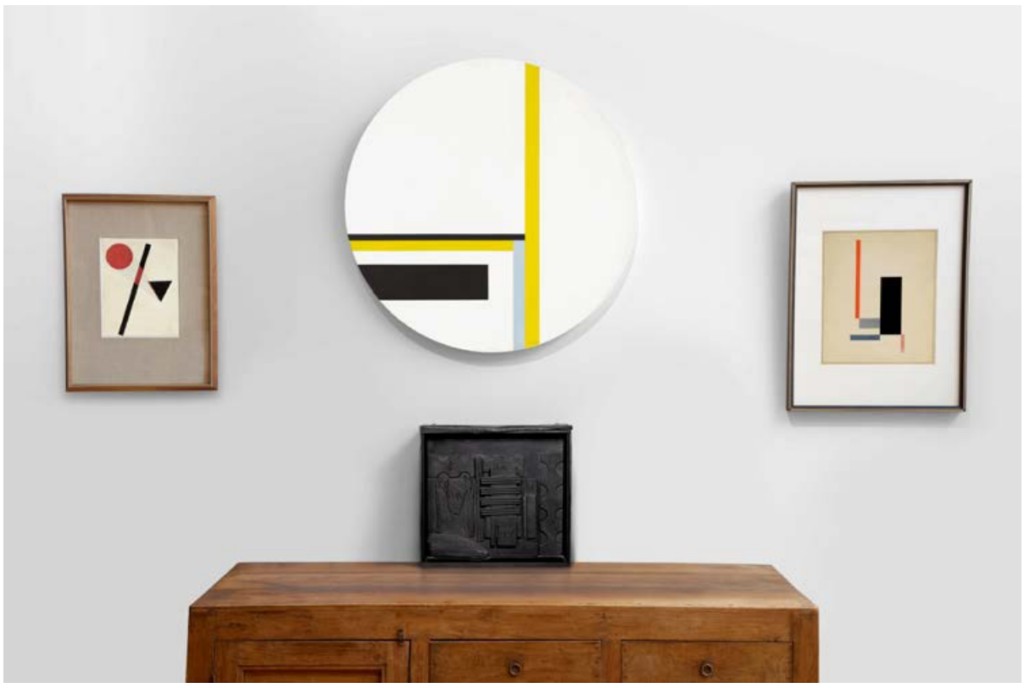 As an ‘accumulator’ of works of art, Edward Albee had a particular vision. In his own words: “my taste in the visual arts tends to run to the nondecorative, the tough rather than the simply pleasing, the abstract rather than the pictorial, and I am drawn to that art which is about art – the Cubists, the Constructivists, the Bauhaus, Duchamp, Bueys, the Abstract Expressionists, and constantly, to the young artists” (Edward Albee, A Playwright’s Adventure in the Arts). The works being offered at Sotheby’s this September stay true to this mantra.

On viewing, appreciating and collecting art, Edward Albee focused on context and dialogue. In his own words: “there is something that makes something art…It doesn’t have anything to do with anything except the piece itself is art in context” (Edward Albee, Context is All). The works displayed in his Tribeca apartment reflected this philosophy, with abstract paintings contextualized by African sculptures, and works by contemporary Americans in conversation with established European modernists. 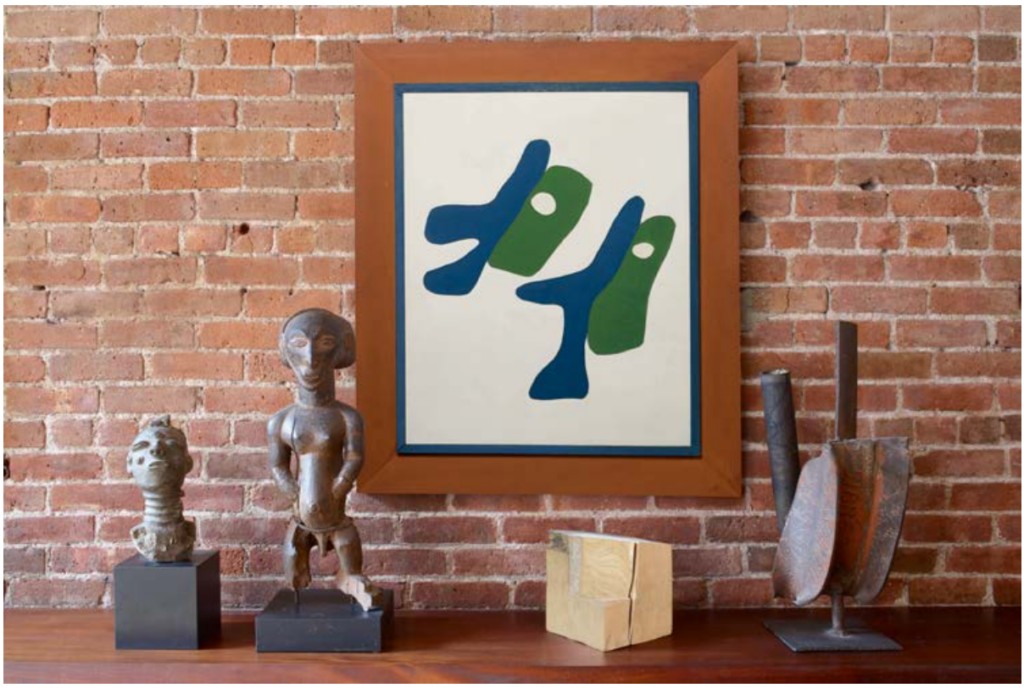 As an artist, Jean Arp explored the intersection of reality and abstraction. This play is best appreciated in his painted wooden reliefs that straddle the natural and biomorphic worlds – of which Les Deux Soeurs is a superb example (above center, estimate $2.5/3.5 million). Executed in 1927, the work was completed at a time when Arp lived next door to Max Ernst and Joan Miró. The present relief evolves from his earlier roots in Dadaism and transcends into the abstract world, with humor and whimsy.

“I haven’t looked up the dictionary definition of sculpture lately…but no catalogue will be complete, will do the trick. For sculpture mutates faster than any other art form I know of.”
— Edward Albee, Some Thoughts on Sculpture

As a voracious collector with an eclectic taste, Edward Albee took an interest in sculpture, in addition to paintings. He had a particular fondness for sculptures and other works of art made by indigenous cultures of Africa and Oceania. A highlight from Albee’s African art collection is an Ancestor Figure (Singiti) from the Hemba people of modern-day Democratic Republic of the Congo (previous page second from left, estimate $15/25,000). While in Albee’s collection, the stylized and elegant forms of the Hemba figure were presented in dialogue with the simple biomorphic forms of the Arp painting, just as artists of Arp’s generation engaged in dialogue with the striking art forms they encountered in African and Oceanic sculptures that entered European collections in the early part of the 20th century. 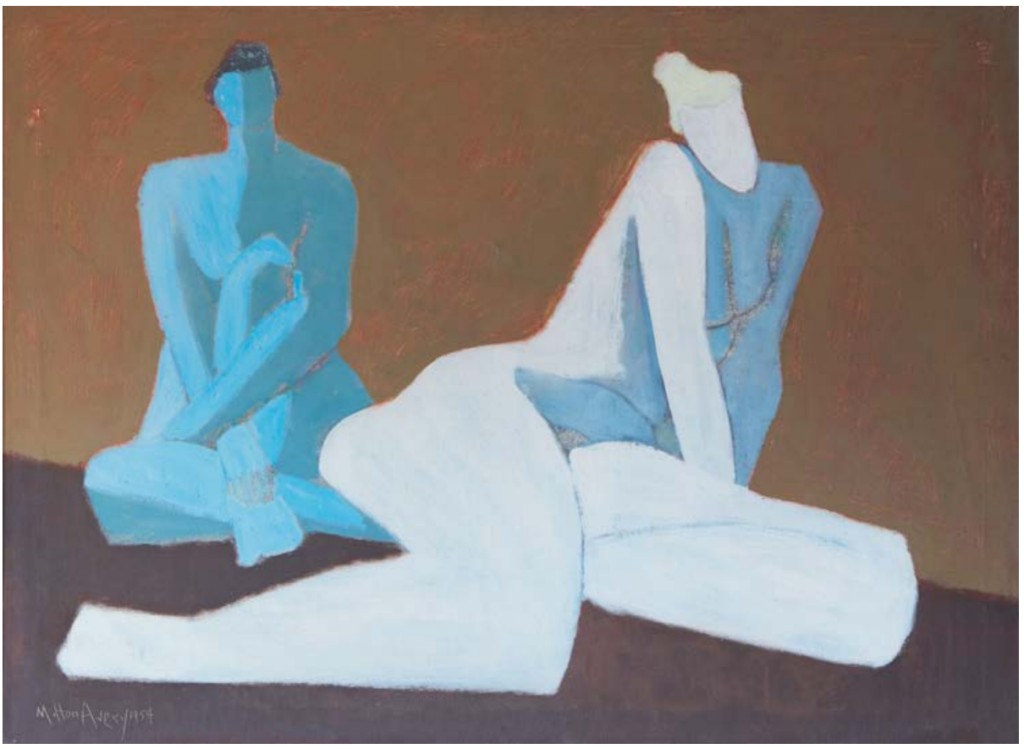 “I was hooked. I was young and quite poor at the time, and while Avery’s prices in those days were still a laugh, I could afford only one painting. I chose a canvas of two sprawled figures – one ghostly white, the other Avery blue, on a brown field – and went industriously back to my desk to write another play so that I could get some more.”
— Edward Albee, Milton Avery 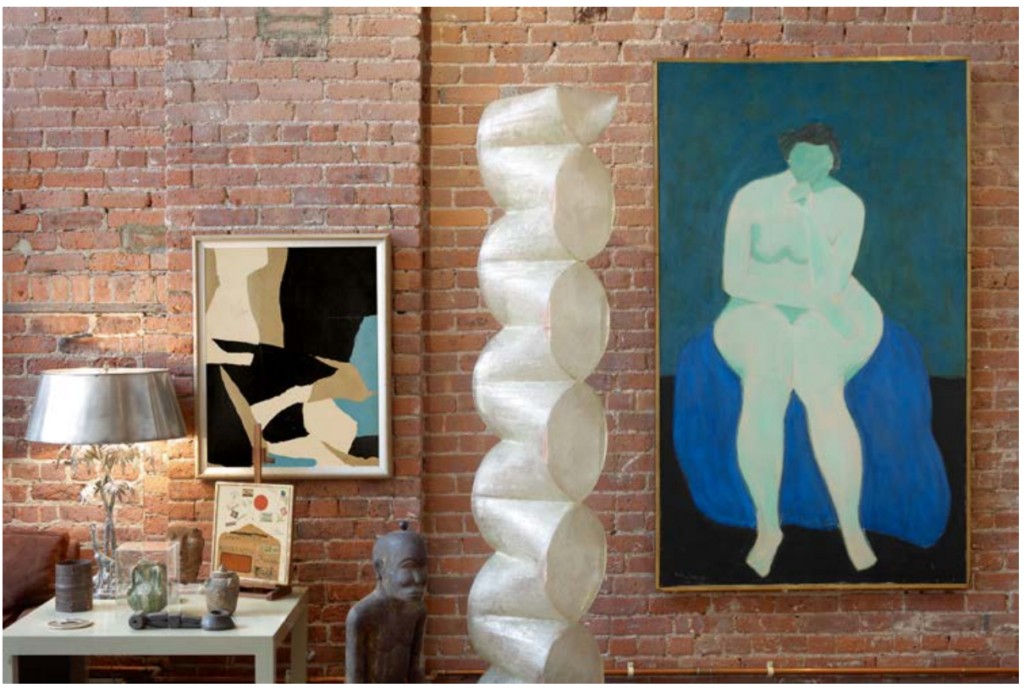 Purchased directly from Milton Avery during a visit to the artist’s home in New York City, Two Nudes exemplifies the careful balance of form and color that Avery achieved during the mature period of his career (previous page, estimate $400/600,000). As in the best examples of his work, here Avery reduces compositional elements into their most simplified forms, ultimately synthesizing representation with abstraction. These daring aesthetic ideas are also evident in 1960’s Meditation, a work that displays the striking luminosity the artist created by layering thin washes of pigment on the canvas in large color areas (above, estimate $2/3 million). The work, prominently displayed in the center of Albee’s Tribeca loft, is among the largest the artist created and attests to the influence Avery’s bold consideration of color played on Post-War painters such as Adolph Gottlieb and Mark Rothko. 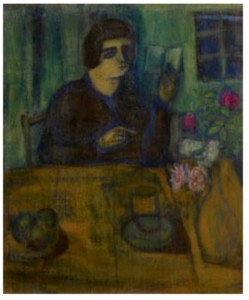 A rare early work by Marc Chagall, Portrait de la soeur de l’artiste depicts one of the artist’s sisters and represents a significant time in his career when he was a new resident of Saint Petersburg (left, estimate $1.5/2 million). The strong bold lines and the proximity of the objects and the sitter are all characteristic of the Jack Diamonds group and the NeoPrimitivists Natalia Goncharova and Ilya Mashkov – two artistic movements taking place in Russia at the time of Chagall’s residency.

“These paintings dance and prance and sweep and swerve and shout in their enthusiasm. All is exuberance – the great arcs of paint, the astonishing juxtapositions of color. It is not a mindless outpouring, of course – intellectual control is behind the free spirit in every canvas. What it is, most precisely, is the joyous outpouring of a major artist who is sure of her gift and is happy to share it.”
— Edward Albee, Lee Krasner 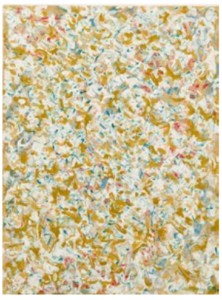 Edward Albee’s adoration for Lee Krasner and appreciation for her work are apparent in his writings on the artist. Untitled, signed and dated 1964, marked a period in her life of spiritual renewal (right, estimate $120/180,000). Marked by vivid colors and feathery brushwork, the light, transparent composition encapsulates the calligraphic aesthetic that became her calling card. 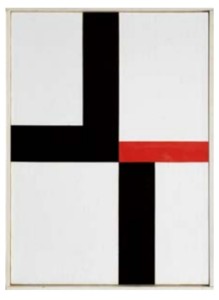 Another American artist that Albee respected greatly was John McLaughlin, who has three works featured in the sale, two of which were recently exhibited in the artist’s retrospective at the Los Angeles County Museum of Art. Inspired by Kazimir Malevich and Japanese literati painters from the 14th and 15th centuries, McLaughlin’s practice centered upon reducing abstract painting to the essential elements of form, color and line and creating evocative paintings that defied fixed meaning. V-1957 captures this paredback aesthetic (left, estimate $80/120,000).

Edward Albee’s preference for non-decorative, abstract art is evoked in Wassily Kandinsky’s Weiss Auf Schwarz (White on Black) (below center, estimate $800,000/1.2 million). Painted in 1930 while he was teaching at the Bauhaus – notable for its artistic cohesion amongst its faculty and students – the work is the result of years of experimentation in abstract forms and geometric compositions. In fact, this dense and energetic arrangement of squares and rectangles is one of the few oils Kandinsky painted in the exclusive color palette of black and white.

Contemporary works of Abstraction are abundant in the collection. In addition to John McLaughlin, Edward Albee acquired a number of works by Albert Eugene Gallatin and Charles Green Shaw, including New York World’s Fair and Conception respectively (above left and right, estimate $40/60,000 and $20/30,000 respectively). Both members of Abstract American Artists, these two artists were crucial to the development of abstraction in the United States. As significant players in this artistic space, and representative of the Edward Albee Collection, works by Gallatin and Shaw hung in places of prominence in his Tribeca loft.