The fast and furious: watch spotters 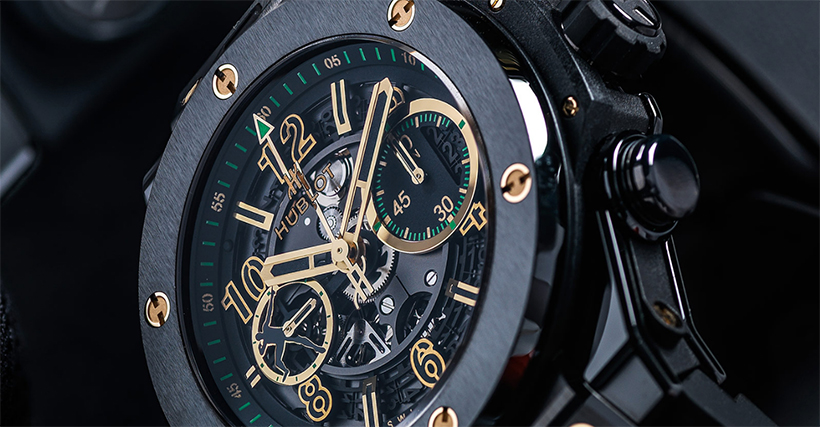 Arguably the greatest athlete of all time and the only footballer to win three World Cups during his career, Pelé is one of the leading sports personalities with whom Hublot has partnered in its creation of unique limited-edition pieces; Usain Bolt is another. The Big Bang Unico Usain Bolt was released to mark the Jamaican sprinter’s participation in the 2016 Olympics, during which time he added more gold medals to his collection.

The watch features a lightning-bolt chronograph hand, the embossed outline of the Jamaican flag on the strap, and a gold-outlined figure of the athlete himself within the running seconds subdial.

While many sports professionals don’t wear watches while they’re competing or training, there was much excitement among watch spotters who noticed South African sprinter Wayde van Niekerk wearing the RM 27-02 on the track at the 2016 Olympic Games. The watch was originally designed by Richard Mille for tennis player Rafael Nadal, who at time of writing is number one in the ATP rankings.

The task set for the watchmakers was to ‘bring a tourbillon into the arena that was capable of withstanding the shocks incurred for hours on end on clay courts, which can involve forces of several hundred G, while remaining totally comfortable and ridiculously lightweight (less than 20 grams)’. That’s an immense challenge for any tourbillon movement but Hublot did it, launching the lightest tourbillon wristwatch in the world.

Quill & Pad online magazine founder Elizabeth Doerr quotes Richard Mille describing Nadal as a human test bench, an integral part of the research process for this wristwatch. Simply bumping your wrist against a table creates an energy wave of about 200 Gs in your watch. Sensors worn on Nadal’s wrist recorded his serve measuring between 800 and 1 000 Gs. Richard Mille certified the RM 027 RN up to 800 Gs and eventually the RM 27-02 up to 5 000 Gs, which Nadal confirmed was ‘hardly needed’ on court.

Doerr spotted another Jamaican sprinter, Yohan Blake, as well as left-handed golfer Bubba Watson wearing Richard Mille timepieces during the Olympics that year. ‘Watson’s go-to watches include the RM 038, the RM 38-01 outfitted with a G-sensor to record the force of the golfer’s swing, and the RM 055,’ she writes.