Watch collectors often focus on a particular niche once they start getting serious. For some, it’s about the key models of a certain maker (like Rolex Daytonas); for others, it may be a specific movement. For Metse Phiyega, it’s about collecting what he likes. 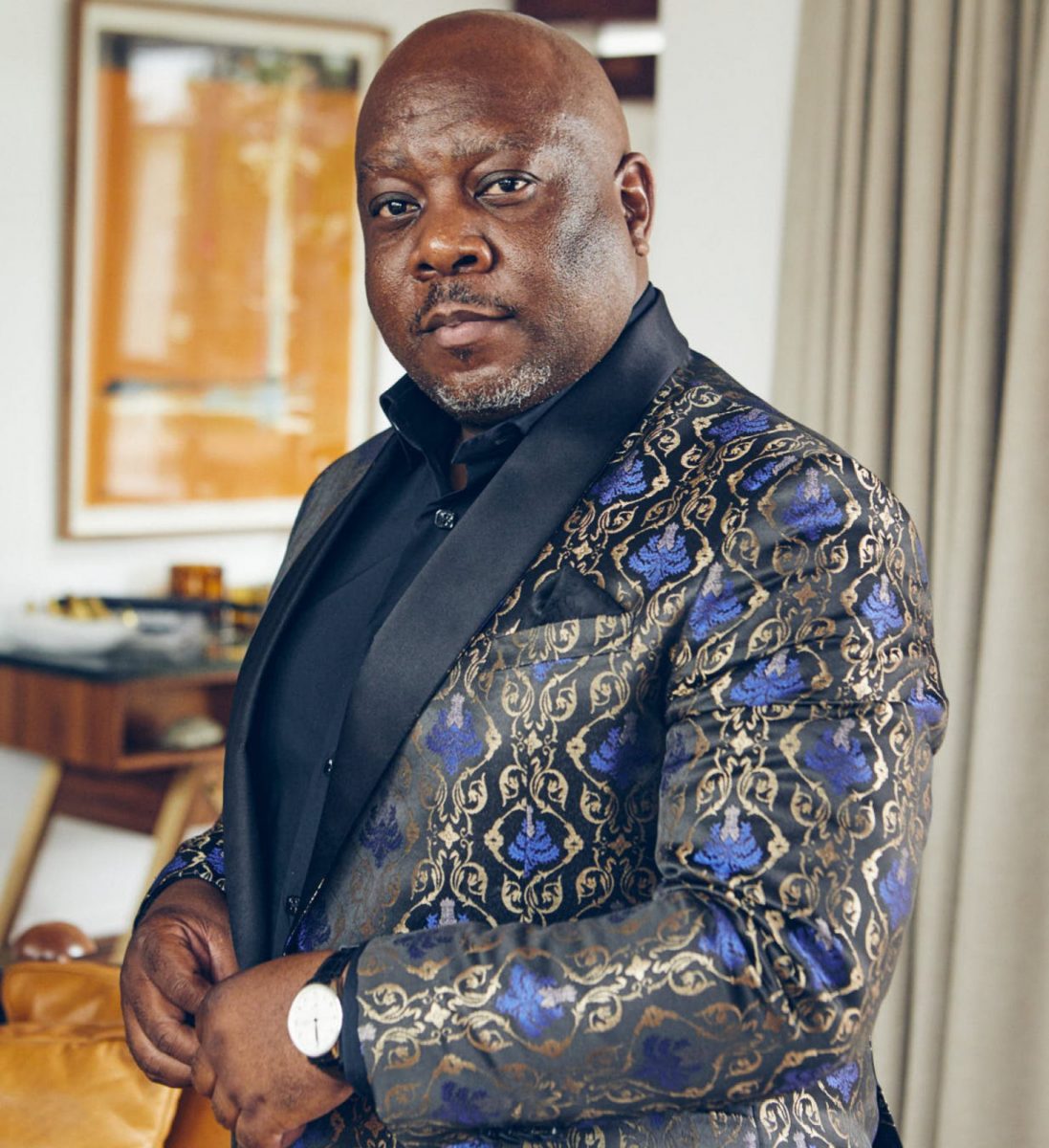 ‘By the cigars they smoke, and the composers they love, ye shall know the texture of men’s souls.’ – John Galsworthy. That’s one way into the world of Metse Phiyega – entrepreneur, world traveller, patron of the arts, watch collector. Amazingly, he’s one of the few who actually uses his watch to tell the time.

‘The Panerai is nice on the plane – the Luminor used in the indexes on the dial means you can still read the time in dim light. I just prop it up in the cabin, so I can glance at it from time to time to see how far I’ve got to go,’ he says.

The Panerai Luminor Marina with the alternate green strap (Phiyega’s favourite) forms part of his four-part travel collection, which comprises an IWC Portugieser, Omega Seamaster and a Baume et Mercier Capeland Shelby Cobra Limited Edition with the striking yellow detail on the dial. ‘It’s a beautiful piece. It comes boxed with a model of the car.

As soon as I saw it, I said I’m taking this one.’ Phiyega also likes fast cars. He’s been into F1 since a family friend took him to watch what he later learned was the last F1 race to be held at Kyalami in 1993. It’s been a passion from that momentous occasion. ‘I plan my holidays and business meetings around F1 events.’

Phiyega likes the Omega Seamaster GMT for its ability to track time in other time zones. Of his first watch, he recalls, ‘It was a Casio, the one with a calculator on it. It was fascinating. My mother bought it for me from New World in Pretoria CBD and I wore it every day. I must have been about 10 years old.’

It had a digital display, which made it easy to work out the time. Later, as a young teenager, he was given a Swatch for his birthday and has been hooked ever since. That memory inspired him to buy his daughter one too. 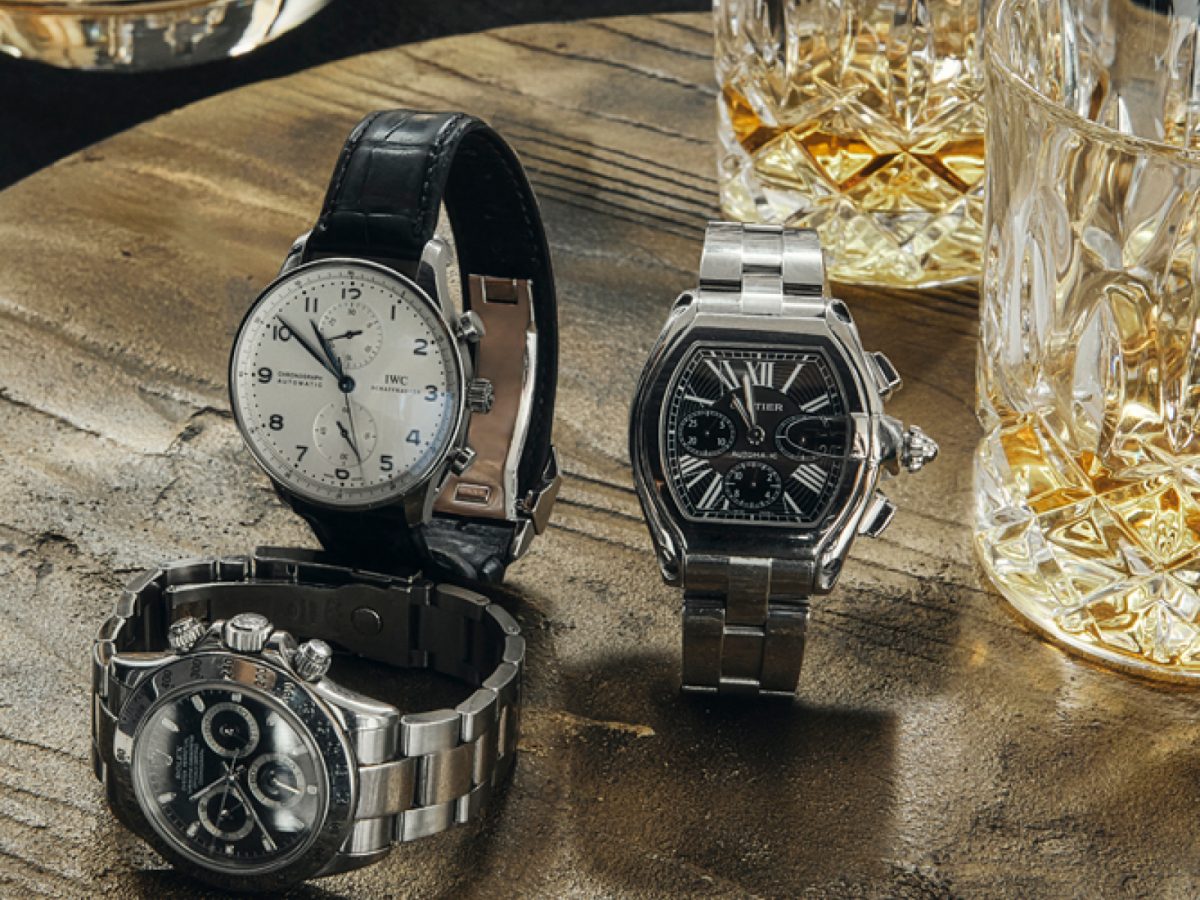 To me, from me

Phiyega has bought all his watches himself, bar one that was a thank-you gift from a friend. Some are investment pieces, which he sells and lives to regret. ‘I sold a Rolex with a black dial. I regretted that. When you see it again, and someone else is wearing it, you think to yourself, “I shouldn’t have sold that.”’

He favours a leather strap for its classic look. He’ll opt for a clean white or black face, such as the design style synonymous with the IWC Portugieser or the Vacheron Constantin Overseas. He also loves the IWC Big Pilot, with its eight-day power reserve, and Spitfire detail on the hand. He’ll choose a Rolex or the Cartier Roadster for smarter occasions, the Vacheron Constantin with the black dial being his first choice for a formal affair as it suits his wardrobe. ‘The bracelets look very classy, especially when I’m going out in the evenings. I also like the sporty look, the chronographs with the big faces, big bezels and rubber straps. They make nice business and holiday watches.’

So when it comes to the crunch, how does he decide on the final purchase? He spent an entire morning trialling the new BR05 at the Bellagio Diamond Privé exhibition of bespoke wristwatches and jewellery, and in the end, fell in love with a one-of-a-kind Franck Muller Vanguard with green detail on the dial. It’s reminiscent of the Richard Mille style and the brand has partnered with the Haas F1 team since 2016. 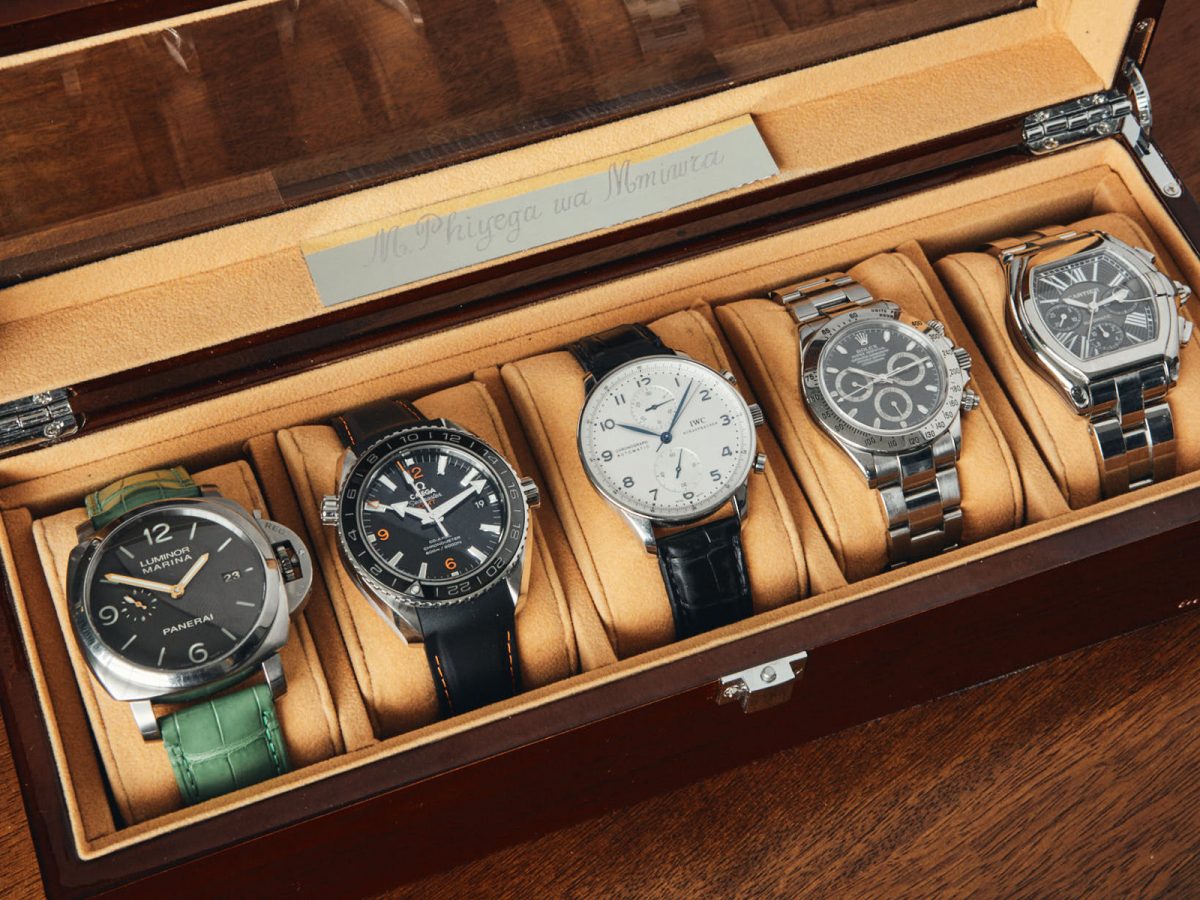 ‘For me, when I see a piece, I love it. I know when I hold it in my hand or put it on my wrist that it’s the watch that I want. It doesn’t matter if it’s got a leather strap or a bracelet, if it’s expensive or not. And it’s not just about the movement. It’s the casing and the product marketing that make it what it is. Look at the Baume et Mercier – that presentation was enough to make me buy it.’

And then there’s the U-Boat Capsoil, one of his latest acquisitions. It features an oily liquid that surrounds the dial, transforming it into absolute black, which gives it depth and a 3-D effect. It’s absolutely mesmerising because it offers an amplified view of the hands, which seem to float free. Phiyega put it on his wrist and promptly bought it.

For him, the process of buying a watch is the same as investing in an artwork. ‘The designers are artists ultimately, and I see them the same way.’ In the meantime, he’s got his eye on a skeleton – a design feature that will allow him to admire his mechanical watch movement through a cut-out on the front or back of the piece.

As for keeping track of time, Phiyega winds his watches when he wears them. It’s about seeing magic happen, a ritual that gets his mind in gear for the day ahead. A habit borne from fascination.